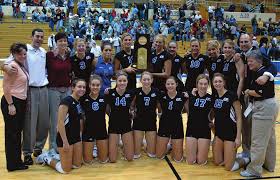 Volleyball: A Way of Life for Ms. Lauren Hanson

Volleyball. Track. Basketball. Three sports, along with the usual 6 hours of class each day and a pile of homework to do after practice. That is what a three sport high school athlete goes through. Now, think about this one; maintaining your grades, along with going to practice every day and maintaining the parameters of the scholarship and your social life all while spending most of you time in the classroom and the gym. Many people consider a gym or field to be their second home, but for teacher Lauren Hanson, the gym was her home. This is what led to the love of the game.

“[My dad] would bring me to the gym every Sunday and we would spend about an hour practicing hitting and all of the basic skills from sixth grade on,” Hanson said.

According to Hanson, it was her dad that really got her into the sport of volleyball. Having watched him when he played and visit the gym every Sunday for an hour adds up. 52 hours of one-on-one practice time. These practices carried over into high school, totaling out to be 312 hours in all.

“I was very straight laced in high school,” said Hanson. “I focused on athletics and it was a passion of mine, as well as academics.”

Ever since the sixth grade, Hanson has been attending site camps held by numerous colleges around the area. But one in particular was Grand Valley State University.

“When I started going to this camp, that is really when the coach began recruiting me,” Hanson said.

Her focus on academics and athletics definitely paid off when she was offered two full ride scholarships to two different colleges for volleyball. One being Bowling Green State University in Ohio, and the other being Grand Valley State University here in Michigan. Both being the same and different in numerous ways.

Both having the major she was looking for, Hanson had to make a decision. After weighing the options, she eventually chose Grand Valley State University because of the “campus and coaching staff”.

“My junior year was my best year in college because I just worked really, really hard.” Hanson said. 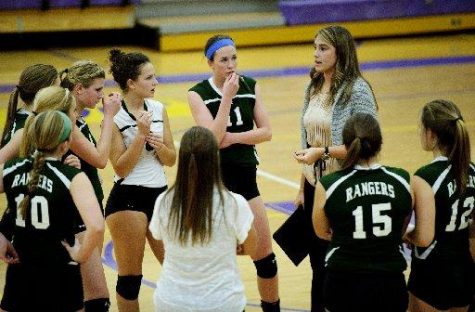 Although on a full ride, Hanson did not see the most court time until her sophomore year, but between her sophomore and junior year,  she “made huge gains” and was able to make junior year her best.

“I had an injury going into my senior year, so that was why it was not as good as my junior year,” Hanson continued.

After the injuries and time on the court it was time for her to graduate and start teaching. She accepted the job here at FHC and knew that one day she wanted to take over the volleyball program.

“It is a game that I wanted and needed to pass on to a younger generation” said Hanson.

Throughout her life, her stay at Grand Valley and the duration of her career, Hanson said that no one coach had a large influence on her. She said that her father had the biggest influence on her. However, junior volleyball player Sabrina Harrison thinks differently.

According to Sabrina, Hanson is one of the coaches to make a lasting impression on her and has taught her many lessons. She summarized how Hanson is ready and willing go to go to college camps with the girls, and to help with exposure to college coaches.

“Hanson has made a lasting impression on me. She taught me that any team is beatable,” Harrison said.