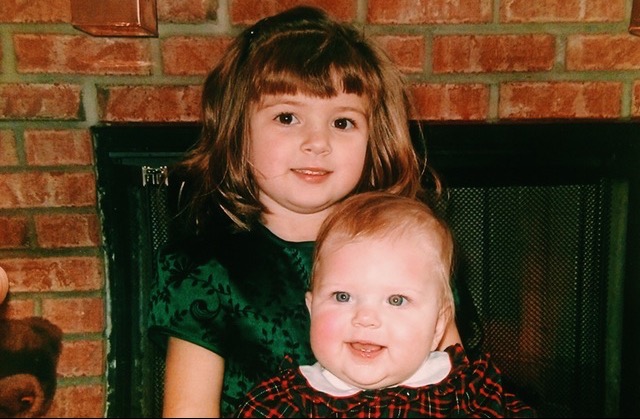 Every flipping morning, I am awakened at exactly 6:00 a.m. by the same person: my little sister, Kristen Suzanne Scutch.  I have developed an absolute hatred for the urgent turning of door knobs, the clashing of makeup brushes hitting the bathroom counter, the opening and closing of drawers to find one specific pair of leggings, and the movement of rushing back and forth between rooms with hopes of still being able to have breakfast before school at exactly 6:27 a.m.  My little sister’s ways have managed to hit all the right buttons to drive me insane, and I do not know when there will be an end to it or if there is even hope to cease her rigorous and obsessive ways.

If you were to compare the two of us side by side, you probably would not think that we were sisters, or even related for that matter.  The first thing you would notice is the difference in hair colors.  Kristen’s hair can be described as pin-straight and honey-blonde with little, tight curls peeking through the top of her forehead, which she’s had since she was little, that are accompanied by hazel eyes tinted with light shades of blue and green.  If you were to look at me, my deep, dark brown eyes are the first feature you may notice.  And, unlike Kristen, my hair is is wavy and brown with natural red-ish, blonde highlights running through it.  Not to mention my face is much round than Kristen’s.  I suppose I get that from my mom.  You may be wondering about our heights.  Well, it’s safe to say that we’re both about 5’5”; however, Kristen’s long legs, which she gets from our dad, has allowed her to be taller for her age as opposed to me who stands on the shorter end of my age group.

To describe Kristen’s personality, it’s anything but normal.  What twelve year old girl does their weekend’s work of homework on a Friday night? Sometimes, I feel as if we cannot get through even one episode of Chicago Med without her having the urge to do a seventh grade science study guide.  In some ways, Kristen always feels like she needs to be ahead of the game or always on the ball.  And as okay as that is, it is just not my style.  I prefer taking things and situations in a much more relaxed, unrushed manner.  I divide my weekend in half: Saturday is for play and Sunday is for work. I suppose each way of doing is fine; however, being that we’re sisters, you would think we’d have the same mindset when it comes to homework.

She’s a nervous Nellie if there ever was one.  She plans, double plans and, triple plans to make sure every base is covered.  She was the eccentric prima ballerina with every hairpin firmly planted around her perfectly sculpted bun. Kristen is never late.  If anything at all, she’s early and if weren’t for me, she would be extra, extra early when she and I are going somewhere together.  My more relaxed approach to every routine there is pretty much throws her into a hyperventilating banshee-like tizzy.

But when it comes down to it, why then did she chose the violin when it came time to pick an instrument in sixth grade?  Because I played the violin.  Why did she give up ballet in order to ride and jump horses?  Because of Rudy, the horse I already ride and show.  Why is she choosing to study French in high school?  Because I first chose to take the class my freshman year in high school.  Why does she have a Vineyard Vines shirt? You guessed it; because I first had one.  So, in spite of our striking differences, maybe we aren’t so different after all.