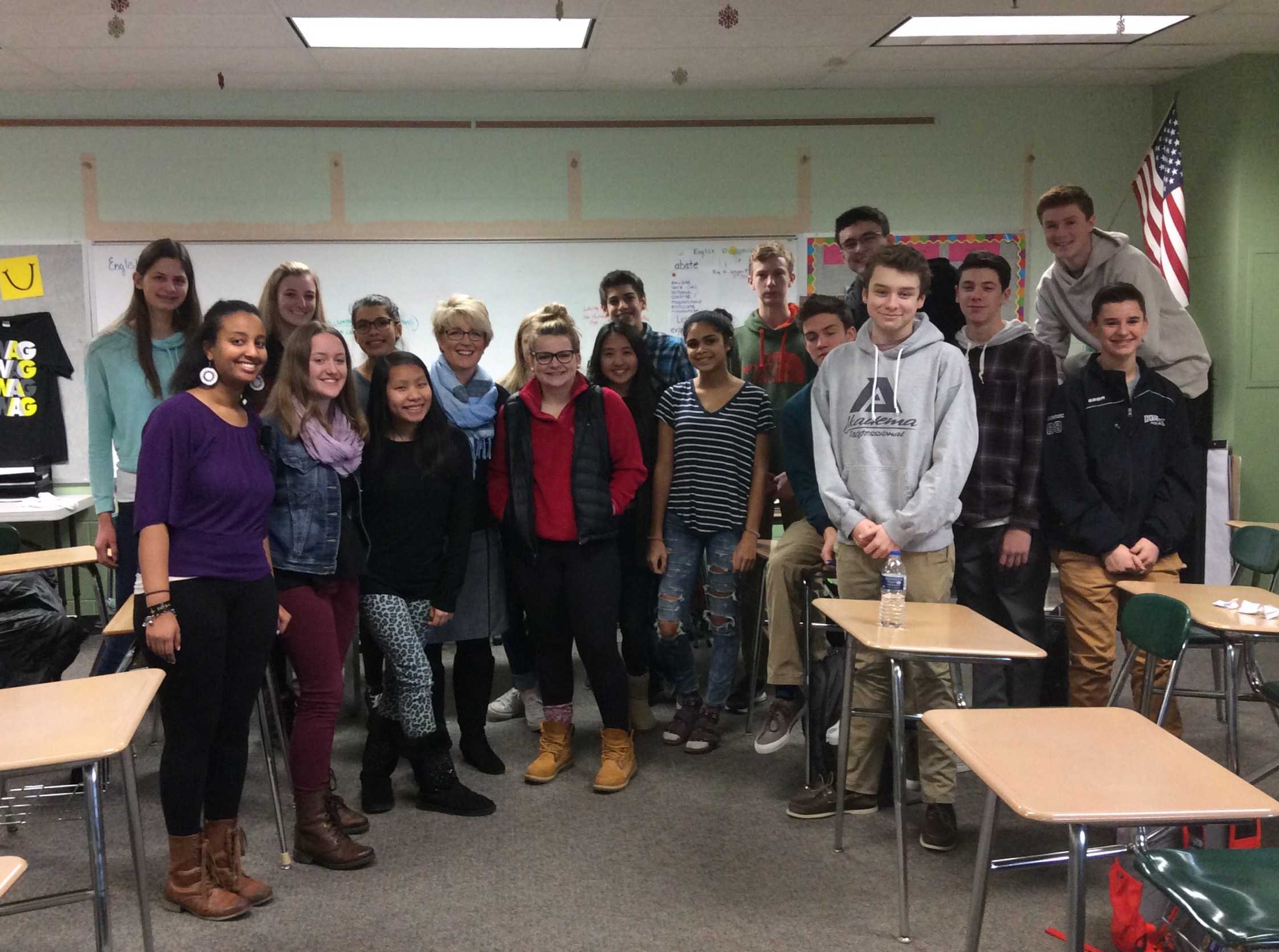 Michele Wallace: For the Love of Teaching

Her energetic voice echoes down the hall in between classes as she stands outside her classroom, calling to all of her students, some new, some current, and some old. The bell rings, and English teacher Michele Wallace waves off the last few stragglers, encouraging them to get to class as she shuts her door and turns to her class, ready to begin the day.

Teaching is nothing new for Wallace. With fifteen years of teaching and three years of substituting under her belt, she’s gained a lot of experience in her time at FHC, as well as at other schools in Oregon and Washington. But even as a young girl growing up in Hermiston, Oregon, she knew what kind of job she wanted to have.

“I thought I wanted to be a teacher as young as eighth grade,” Wallace said. “But I didn’t really think about it a lot.”

She said that while in her last year as a middle schooler, she was a student aide for Mr. Harrison, who was her science teacher, and that this was a main influence on her decision to become a teacher.

“Back then you could have a student aide, and he would always leave me alone with the seventh graders, and he’d go get his coffee,” Wallace said. “I had fun helping the seventh graders; they were doing stuff I had done the year before, and I knew how to do it, and it was fun.”

Wallace stated that another one of the main factors that played into her career decision was when she tutored a student from Vietnam, and discovered “it was kind of fun when he’d get something.” It was at that moment that she knew exactly what she wanted to do.

But while she knew the kind of profession, she was still unsure of what kind of subject she wanted to teach. As a senior in high school, Wallace said that she shared a special bond with her English teacher, Mr. Smith. According to her, Mr. Smith was the type of teacher who was “brilliant, and scared the ‘beegees’ out of students at first.” Since she had early release, Wallace said she spent most of her time in his classroom, talking about classes and looking over papers.

“I would spend almost every day with Mr. Smith for an hour, which now, as a teacher, [I think] wow, he really gave me a lot of time, because he probably had work to do, and he let this little senior come in and talk to him,” she said. “He was just really cool, with his Texas drawl.”

She said that he was one of the main reasons she decided to teach English.

After attending Oregon State University, Wallace went on to do student teaching at a middle school in Albany, Oregon. She then switched to a different middle school in Milton-Freewater, where she taught English and reading to both seventh and eighth grades. After having her first son and taking a year off, she and her husband moved to Walla Walla, Washington, where she taught sixth grade language arts, reading, and social studies. After several years off after having her second son, Wallace decided it was time to go back.

“I was only going to go back part time, and be a mom,” Wallace said. “And then Mr. Wallace got a job that moved us out here.”

Once in Grand Rapids, she began working at FHN for seven years. She then proceeded to take an eight-year hiatus, and later came back to just simply substitute. She mostly subbed at Collins Elementary and Knapp Forest Elementary.

“Then I did three long term subbing jobs at Northern for two years, and that’s when it led into this job,” Wallace said. “I was hired as a teacher by Forest Hills in 2007.”

About two years of splitting her days between CMS and FHC, a full time job at CMS opened up. But instead of getting excited, Wallace recalls “feeling like I had been kicked in the gut,” because it wasn’t until then that she realized exactly what level of secondary school that she wanted to teach.

“I had always taught middle school,” she said. “I just love that you can do so much more with high schoolers.”

She said that her favorite part of teaching high school is the students, and that “they’re good kids.” She likes their humor, and their sense of energy. It’s also all of her favorite memories that she’s made at FHC that makes her job worthwhile and fun. One moment that sticks out in particular for her is when she had the class of 2016 as sophomores, and one student, who never spoke at all, challenged another on their opinion on a piece of literature the class was reading.

“The whole class froze,” Wallace remembers. “He said it in such a strong voice that [the other student] didn’t know how to respond, and it’s moments like that where I see students blossoming, or feeling comfortable enough in here to think their own thoughts and express them.”

Name any moment, any project, any time in room 122 where her students had the opportunity to let their creative minds soar-those are Wallace’s favorites.

“It’s just when I see students explode,” she said. “Those are the ones that I really like.”

Fellow English teacher Sarah Velie added that Wallace’s attitude towards her lessons can bring that much more excitement and encourage students to get involved.

“Her enthusiasm can make a dull Monday or a less-than-exciting topic that much more interesting,” Velie said.

Special Education teacher Vicki Felton stated that along with her passion for teaching, Wallace’s Ranger spirit is another thing that makes her stand out among the rest of the staff at FHC.

“She rocks the green and white striped overalls during the spirit week of Homecoming,” Felton said.

And yet, there’s much more to Michele Wallace than just her ability to teach her students well. Velie stated that it’s the way she sees how her coworker cares for not just her students, but all of the students at FHC, that makes her a great teacher.

“She stays late to work one-on-one with students who need extra help,” Velie said. “She’s always there to lend a listening ear to kids who just need to talk.”

Felton agreed, saying that Wallace is constantly trying to think of new ways to reach each and every one of her students.

“All teachers care,” Felton said. “But I think that Mrs.Wallace takes her work so much to heart that [it’s almost like] she takes each one of her students home with her at the end of each day.”

She added that her favorite part of working with Wallace is her dedication to helping all students grow.

“She genuinely cares about each and every student,” Felton said. “[She] wants to meet each of them where they are in their educational journey.”