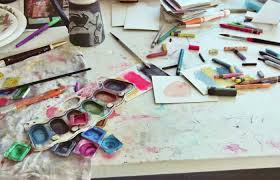 How Studio Art Crushed My Anxiety

There is no place that I feel safer than the art wing here at FHC. Nothing brings me more comfort than the smell of acrylic paint, the silky texture of clay, or the soft scratch of pencil on paper. And nothing makes me feel more at home than my third hour studio art class.

As a junior last year signing up for my senior class schedule I knew what core classes I wanted to take on no problem. Math, Science, and English were filled out promptly but my hand hovered over the blank left for an elective class. Since freshman year I had wanted to take AP Studio Art class, but now I wasn’t as sure as I thought I was. With so many gifted students walking the halls, would I be able to keep up with the level of talent everyone else exhibited?

Eventually, after much deliberation, I decided that I would regret it in the long run if I didn’t take the class during high school if I wanted to eventually major in interior design. So I put my anxiety aside as I scribbled down “Studio Art” in the blank provided on the class choice form and hoped that I would be good enough in comparison to every other art student.

Summer passed and finally senior year was very real. I was already ready to graduate the minute I walked through the front door, but I was interested to see how this art class was going to go. First and second hour dragged on (it was syllabus day after all) until third hour arrived. I made my way down the endless hall that directed you towards the elusive art wing that was fully stocked with all the paint, paper, and other art supplies that you could ever need. I found a spot at a table with a few vaguely familiar faces and hoped that this hour wouldn’t be as dull as the past two. Studio Art was no exception to the unwritten rule that stated the first day of class meant that the whole course would be outlined in detail. However, as the week progressed, we began to slowly progress to work on our own art pieces which only furthered my fear of inadequacy.

I tried my hardest to avoid looking at the works of my fellow art students but it was inevitable that I would sneak a glance at my neighbor’s current piece, sparking a twist in my stomach and a small voice in my head to taunt, “You don’t honestly think you deserve to be here, do you?”

But even more dreaded than viewing other people’s pieces was critique day in the art room. This jitter-inducing day meant that everyone got the pleasure of standing in front of the whole room and presenting their latest piece. Having some social anxiety, critiquing held just as much uneasiness as giving a speech for thousands of judging spectators. With each person’s presentation my heart sank lower and lower into the floor until I felt as though there was no possible way for me to ever lift my spirits in the name of art again. It was astounding how good everyone was.

Much to my internal protest, it was my turn to show my piece. I stumbled over my words as I struggled to say anything good about my own work. My self-consciousness was louder than my own voice could ever project and it was obvious to everyone else in the room. I vowed that I would never present again.

Weeks went by and critiques continued but slowly I began to understand the beauty of Studio Art. As I watched people personally grow as artists and develop their styles, I came to the realization that would mean the most to me throughout my whole high school career: everyone was fantastic in their own way, even me. Some students excelled at photography, others mastered digital art, and the majority shined through paint and watercolor. Every style was vastly different from the next student but that by no means meant that one person had more talent than the last. I was trying to find my own way to express myself through art and it was ok that I was still developing. In fact, it made it more fun than anything. It was liberating to let go of my self doubt for an hour a day.

So AP Studio Art, thank you for letting me tear myself down so that I could build myself up stronger than I ever thought possible.