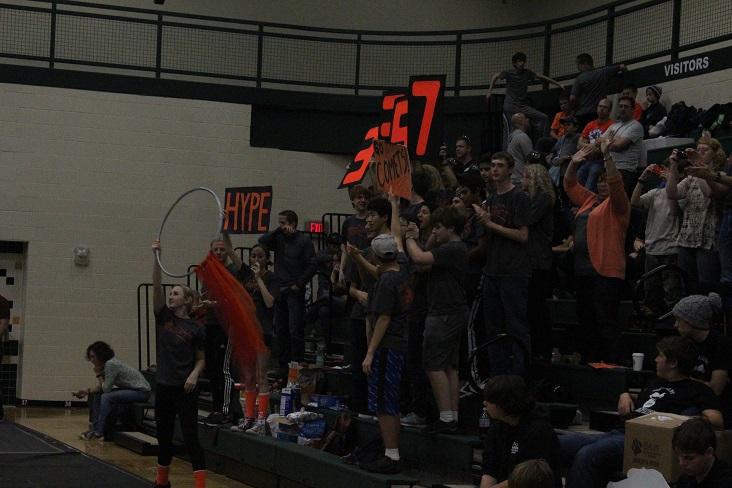 There is a cacophony of noises the minute they step out of the warehouse. The voices of pilots rigidly stating flight departures and terminal numbers,  the brisk wail of colicky infants as they are hurriedly boarded on to the plane, the boisterous sound of wheels scraping the ground as the 450 ton monsters descend on their bellies. This hectic atmosphere is a direct juxtaposition to the subdued atmosphere these dedicated students bury themselves in everyday after school.

As they  burst out through the double doors after a long day of practice, they can not help  but be both swept up and overwhelmed by the chaotic energy of the Gerald R. Ford airport echoing from nearby; they are so used to merely hearing nothing but the slight mechanical click and continual scratching of lead on paper .

That continual scratching of lead is the sound of about thirty  intelligent teenagers from all over the district huddled around a counter top, scrawling down complicated math equations and  complex mechanisms. That slight mechanical click, on the other hand, is the sound of robots treading across the ground of the warehouse.

“My dad told me I should check it out,” said senior Steven Turley, when questioned about how his interest for the robotics team first transpired. “At first, I was reluctant because I thought it was “nerdy” stuff. I happened to go to the team open house an entire year later and I that was when I  said ‘dad, I have to join this thing’.”

From a young imaginative age, Turley has always been interested in creating things out of nothing; he has always been interested in contriving intricate devices using nothing but his bare hands. However, as he gradually grew taller and his voice began to deepen, the things he shifted from toying with legos, building houses out of red and green pieces, to toying with RC cars and turning four wheelers into six wheelers.

The Robotics team itself resembles a machine that never stops running; with practices every day of the week except for Friday, they are constantly moving. There is no OFF button when it comes to preparing for the annual upcoming competition, one that requires their contraption to meet certain weight and size requirements while simultaneously being able to climb up and down particular objects. However, it is nothing that the FH Robotics team can not handle.

“Each year, we get better and better,” said head coach Paul D’ Amato. “This year we have seen huge improvements in programming and project management. We have an outstanding group of brilliant students. Our students are typically some of the top students in the high school. Most go into engineering programs at top universities and then into top careers. We have two graduates working at Google right now.”

It is no wonder why members of the team go on to wear suits and work in corporations, carrying around briefcases and mugs of steaming coffee. Besides the obvious dedication that creating the machine requires, the competitions themselves demand tenacity, perseverance, and problem solving skills.

“I am extremely nervous during competitions,” senior Max Moore admitted. “You never know when something can break on the robot, and the team has to be quick and reactive to fix the bot, especially when you can have matches within 15 minutes of each other. Occasionally, you can’t fix the bot completely and you’ll have to go into a match partially broke. It’s especially nerve wracking if you’re on the drive team because your performance as a group decides the success of the entire team, with over 6 weeks of building going into the 2 and a half minute match you’re operating the robot for.”

For inquisitive students such as Turley who are used to thinking on their feet- for students such as Turley who have figured out how to fix broken lego houses from the early age of three- the warehouse two miles away from the airport serves as his home away from home. He shuffles there after school most days of the week, ignoring the echoing whine of toddlers who have not yet eaten that protrudes from the building down the street, ignoring the elevated voices of men in business suites as they yell their flight schedules while boarding terminals, ignoring the scraping of wheels as the planes ascend into the sky. Turley simply slips away into the warehouse that is tucked a little bit down the road, separating himself from the chaos, finding comfort in taking a chaotic mess of parts-  intricate bolts and sharp cut metal- and creating something beautiful from it.

“The Robotics team requires us to constantly problem solve,” he remarked when asked what he enjoys  about being involved in it. “In regular sports, the primary objective is to get from point A to point B, whether that be with a hockey puck or a basketball. Here, you are generally doing that same thing- getting from point A to point B- but instead of a hockey puck or soccer ball, you have a robot.”