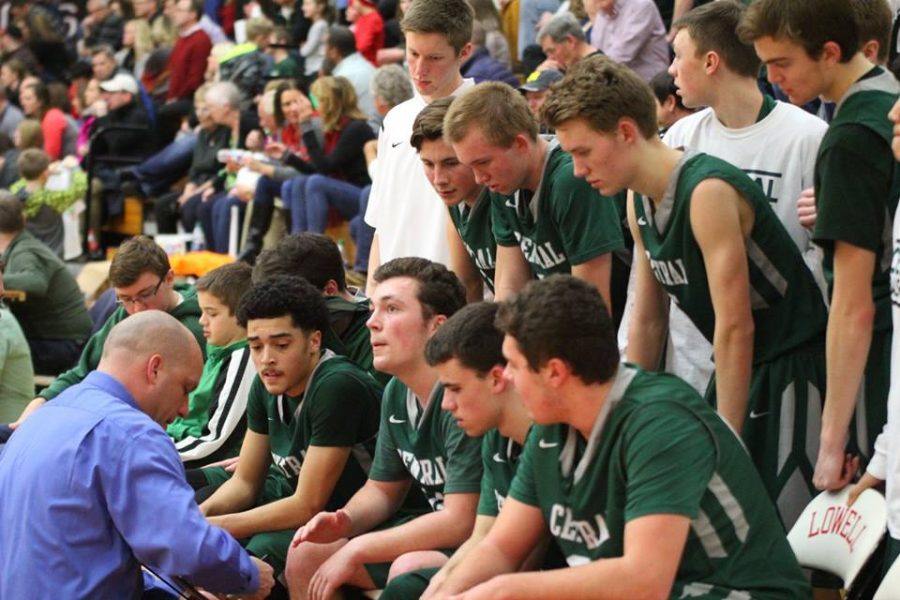 The loud chanting and clapping became overwhelming from the excited Forest Hills Central students and echoed in the gym as they watched the boys varsity basketball team win their first District game against rival Forest Hills Northern 57-49.

“What we’ve talked about since the beginning of the season is when you get kicked in the face a little bit how do you react?” said Central’s head coach Ken George. “I felt at the start of the game you know, eleven to two, we were absolutely kicked in the face, and our guys responded. I felt like ten times during the fourth quarter, ‘can we just finish this?’ But every time it went bad for a minute, we just rose up together. I feel like we faced adversity better than we have in a ton of games.”

While George and his team bounced back with vigor after a tough start to the first quarter, they knew that the challenge they would face after a week of only practice would be the defining moment of the game and would be a struggle playing Northern after the Huskies six game winning streak leading into the game. Where the game was really won however, according to George and senior captain Connor Kelly, was in the week leading up to the tip off, before either team stepped foot on the court.

“I think our mindset was that we were the most prepared team we could’ve possibly been,” Kelly said. “We just had a week’s straight worth of practice where it was probably the toughest week of practice in my entire basketball career and we went at it and hated each other every day leaving practice because we were going at it so hard. So I think we got here today and knew we had won the battle before it even started.”

That didn’t stop Kelly and his teammates from playing hard and making quick recoveries as the Huskies gained momentum at the start of the game and later on in the third quarter as the score began to waver again. The rivalry between the schools has allowed both coaches and players a familiarity with each other and their playing style, something both teams used to their advantage as they prepared to face each other. For Central, that meant taking into account the ability of Northern’s team to bounce back and pressing them so that they didn’t get the chance to.

Another setback the boys faced that allowed Northern to stay in the game and almost come back after Central’s heavy lead was turnovers at key moments because not enough pressure had been placed on defending the ball.

“We had a lot of turnovers in some big situations,” said Ken George. “Fumbles and turnovers when we were just trying to ice the game. Part of that’s on me, I’ve got to practice some things better down the stretch, but I just thought we gave it away too much in the second quarter. We couldn’t quite finish because we kept giving it away.”

After their hard work and preparation for the game paid off, the team still recognizes that there is still a great deal of work to be done on limiting turnovers and putting enough defensive pressure on their opponents. Working to fix these issues will be their only challenge facing their next adversaries, but factors that allowed them to beat Northern will make their presence even harder to beat Friday. The strong mental and physical preparation and the determination that allowed them to defeat Northern can only be attributed to their team’s strong bond, something that can only be attributed to the seniors on the team that brought them together.

Rearing up for their next game Friday against Lowell, the team will go into the game stronger and with more determination after a victory over the Huskies as they already possess the will to do so. Led by seniors propelled to succeed with their last chance to do so, the Rangers move on after their first steps towards winning Districts that the team is sure to be proud of.

“I feel like it being my last year on the team motivated me more,” Kelly said. “The fact that I might never play another meaningful basketball game the next time we lose is a scary thought for me so the only thing I want right now is just to keep playing basketball and keep winning. I’d like to thank the seniors for always having my back out there and staying together. I think we’re the most together group that we possibly can be right now and I think that’s huge for us going forward trying to win a district championship.”

Leading the Rangers against Northern was Kelly with 21 points, followed by junior John Fuller with 19 points. Jordan George added 15 points as well. Tyler Black was the high scorer for Northern, with 19 points.