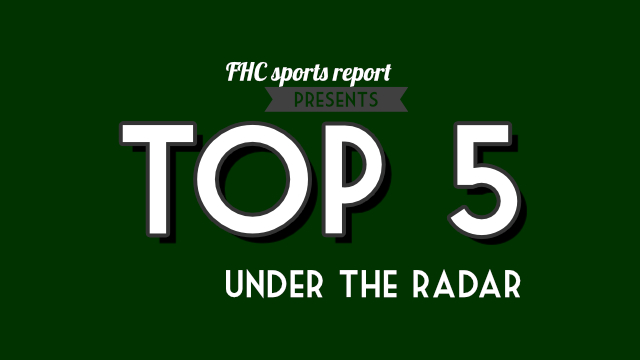 This season, the team was able to achieve several titles that it never expected this early in the program’s existence. The team took second place in the conference, fifth place at the Regional competition, and the Rangers placed in the top ten in the entire state of Michigan. The team ended its season placing in the top three seven times, top five three times, and top ten once.

“This year was really fun,” junior Kate Willimen said. “It was my first year on the team, and it was really great. We’re a second-year program for FHC, and we were able to make it all the way to Regionals and place fifth.”

This season, the girls gymnastics team placed third at Regionals and qualified for the State Meet. The ladies were very successful this season and were consistently placing within the top three at every meet. Some of the team’s top scorers were juniors Olivia Jeong and Hannah Walters and senior Maheen Mulligan.

The boys swim and dive team completed a successful season this year by placing second in the OK White Conference Meet and eighth place in the MHSAA State Finals. Key swimmers this year were senior Henry Schutte, junior CJ Hier, sophomore Avery LeTourneau, and freshman Benji Zorn. The boys finished the season with an overall record of 7-3 and a conference record of 5-1.

What was the best under the radar team?

“This year was really fun,” senior Kayley Reynolds said. “It was just a really good experience, and I liked it a lot. Making it to States as a team was pretty cool and was definitely my favorite memory this year.”

The dance team had a successful season by placing in the top twenty at the NDA Nationals and placing third or above in various competitions this year. Senior Maddie Musgraves led the team with a variety of top-placing solos, and fellow senior co-captains Lindsey Lunt, Rielly Nehls, and Alyssa Zadel were leaders for the team throughout the season. As a team, the girls were also able to place well against many other teams this season.

“Since it was a Nationals year, [this season] was a little more intense,” sophomore Morgan Mittlestadt said. “I feel like we got a lot closer as a team with everything that happened this year.”