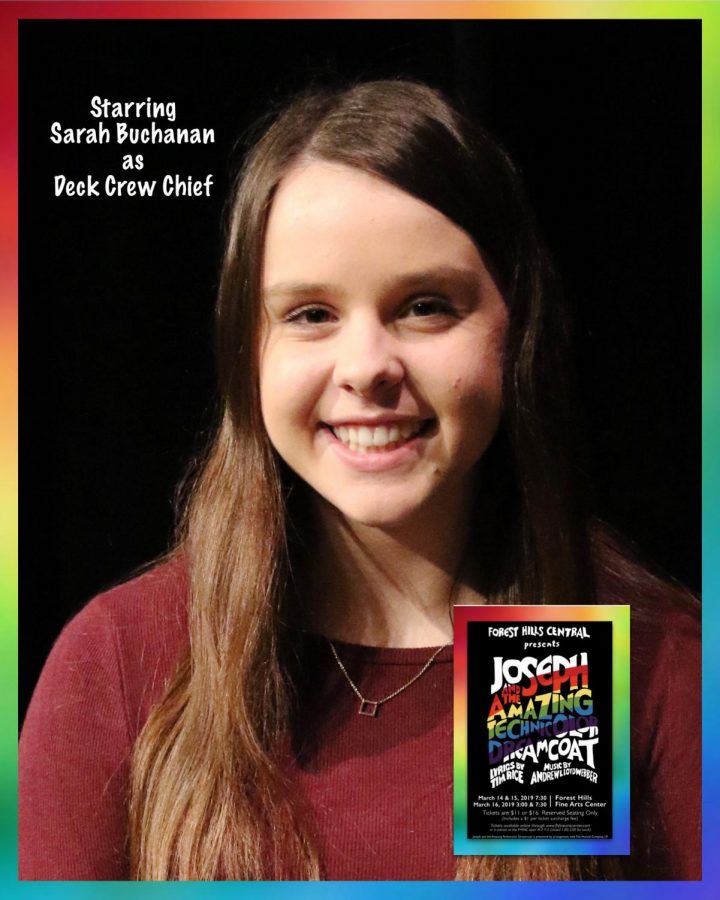 1.What are you most excited about for the show?

“This show has so many talented people in it who have all worked so hard to produce something incredible! It is so cool to be able to watch the whole thing come together from the very first practice to closing night. I am so excited to see everyone’s hard work pay off for an amazing show.”

2. What is your favorite part of being involved in theater?

“My favorite part of being involved in theater is definitely all of the memories I have made. I have gotten to meet and become friends with so many people I never would have crossed paths with otherwise, and I am so thankful for it! The cast and crew really become one big family during the shows, and it makes everything so much more fun.”

3. What was the most surprising thing to you about this year’s show?

“This year’s show is nothing like I thought it would be. Prior to rehearsals, I really didn’t know much about Joseph and the Amazing Technicolor Dreamcoat; it is such a fast-paced, exciting, and lighthearted show that offers something for everyone. There are a lot of people in the cast and crew that have never been a part of a show before, so it’s really cool to see how they are adapting and learning everything so naturally.”

4. What have been some difficulties you’ve had at rehearsals as student director?

“Being the Assistant Student Director is sometimes challenging when you have to be a part of both the high school and professional side of the production. It is fun to hang out with cast and crew members, but also it involves working with professional adult crew members, communication to large groups of people, and being a leader among students who are my age and older.”

5. How has this experience influenced your high school career?

“I never would have expected anything like this for my high school career. I was always a competitive dancer as well as being involved in student council, which are things I had planned to continue throughout high school, but the opportunity to potentially become Student Director was something I could not take for granted. It has been hard to leave the things I am used to and have grown up doing, but it has definitely all been worth it.”

6. What should audiences be most excited for?

“The audience has so much to be excited for! From amazing music and dancing to costumes, lights, and sets there is so much to see in this production! The show is very high energy throughout and is so entertaining. I have seen each song be rehearsed numerous times and I still get excited to see the magic and pure talent that each one offers. You do not want to miss it!”