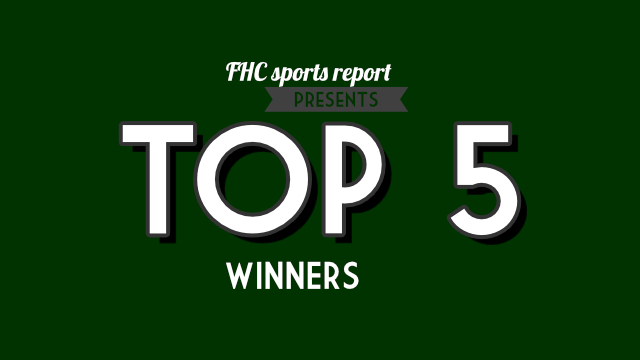 The results for the FHC Sports Report’s Top Fives From Winter Sports are in.

Best Individual Performance: Ben Kastner vs Greenville – this junior bowled 9 strikes en route to a 245 to lead the boys bowling team to a 17-13 win over Greenville.

Best Clutch Moment: Jake Ball and Mitch Wilkinson – Junior Mitch Wilkinson hit a three-pointer to take the lead with eight seconds left. Senior Jake Ball then blocked a layup at the buzzer for the boys varsity basketball team to beat Ottawa Hills 56-54 on the road.

Best Dynamic Duo: Alex Souza and Ben Kastner – these two juniors were consistently in the top two for the boys bowling team. Alex placed fifth in the Regional Meet to advance to the State Championships, while Ben fell just 50 pins short of a trip to States.

Best Underclassman: Avery LeTourneau – sophomore Avery LeTourneau was a key component to many relays all season and individually secured his State cut early in the season against Northview; he would go on to place eighth at States in the 100-yard Butterfly.

Best Senior: Zoey Guikema – this senior was the girls bowling team’s leading scorer throughout the season. She placed tenth overall at the conference tournament in addition to bowling a 178 against conference rival Northview.

Best Under the Radar Team: Dance Team – the dance team placed well in each of its regular-season competitions, highlighted by earning the title of Grand Champions at the St. John’s Invitational. The dancers then traveled to Orlando, Florida and took seventeenth in the NDA Nationals competition.

Best Breakout Season: Competitive Cheer Team – in only its second year as a program, the cheer team had seven top-three finishes, three top-five finishes, and ended the season in the top ten teams in the state of Michigan. The Rangers’ season was highlighted by a championship at the Wyoming Invite, and FHC placed fifth in Regionals, narrowly missing a fourth-place finish to advance to States.