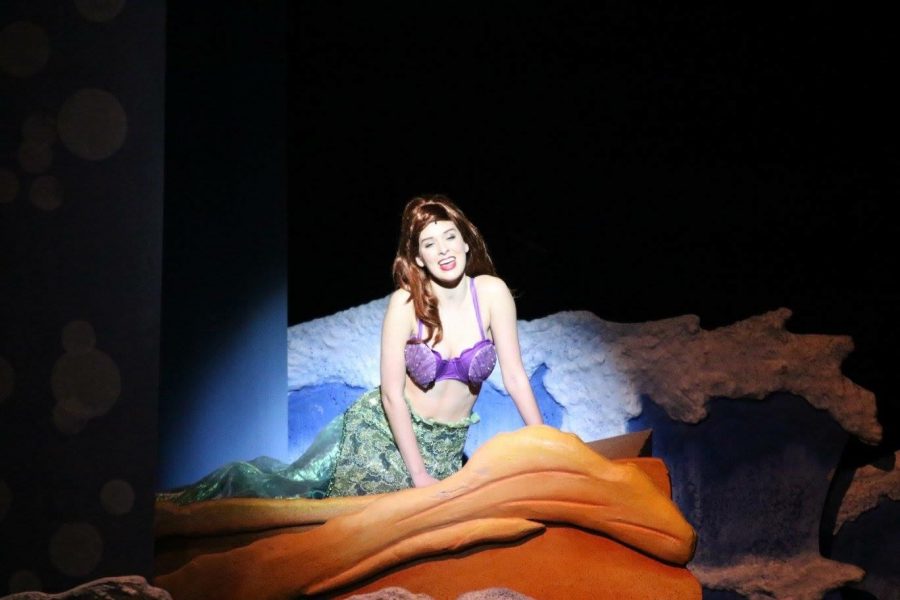 Maura Gill: The Voice of Ariel

If you were one of the many people who attended FHC’s musical production of The Little Mermaid, you may have been one who began whispering to the person sitting next you about a very special, theatrical voice that stood out beautifully among others.

Your heart rate may have begun fluttering as Ariel’s voice hit all the right notes and you may have begun to smile with joy over the marvelous, redheaded, and enchanting character of Ariel.  What made this lead role so unique was the talent she shared with the character which whom she was portraying: her amazing vocal abilities.

This character, Ariel, was played by the remarkable and outstanding senior Maura Gill.

“When I received the lead role [of Ariel], I was so humbled and ecstatic to be able to take on such an iconic character,” Maura said.  “It was intimidating at first as people have such a specific idea of Ariel in their head and even down to [her] voice, but I was eager to work on perfecting every little detail of her personality and story.”

Maura then began to explain that she felt an emotional connection to the character so early on and was very eager to explore it.

Beginning at the age of three, Maura has spent much of her time at a dance studio.  Growing up, she has danced competitively in ballet, jazz, contemporary, lyrical, musical theatre, and tap with the Ada Dance Academy.  Also, for many years, she has also danced en pointe with the West Michigan Youth Ballet in their production of The Nutcracker as well as their other spring show productions.

Maura explains that it was not until eighth grade that she began taking vocal lessons after she received her first solo in choir and wanted to do well with it.  Since she was little, she loved singing along to the radio or on her own, but never had the courage to do it front of others or was too busy pursuing dance.

Going into ninth grade, Maura auditioned for Summerstock, a summer theatre program for Forest Hills students, where she performed as part of the dance corps. However, when she reached high school, her original plan changed as she earned one of the lead roles of Veruca Salt in Willy Wonka.  That is when she “caught the bug.”

After that, Maura realized she loved musical theatre just as much if not more than dancing and continued to take vocal lessons, dance classes, and theatre training.

In the past, Maura has played the following through FHC’s theatre: Veruca Salt in Willy Wonka, Belle in Beauty in the Beast, Queen Aggravain in Once Upon a Mattress, and this year Ariel in The Little Mermaid.  Also, she performed in Grand Rapids Civic Theatre’s production of Mary Poppins her junior year of high school.

“The FHC theatre program has helped me nurture and develop my passion and has inspired me to pursue musical theatre as a career,” Maura said.  “It has also taught me that there is good to every single person and that everyone has such an interesting, different story inspiring me to be empathetic and caring to all people. Art is so powerful in its ability to bring people together and this fact has inspired me to seek to share my work with all different kinds of people.” 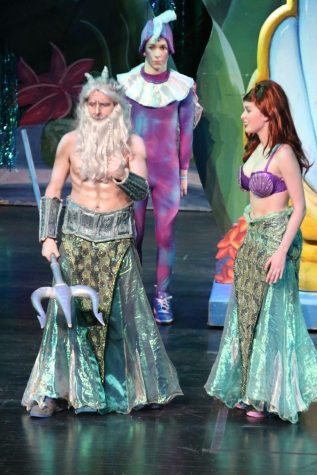 Maura plans to earn a Bachelor of Fine Arts, or BFA, in musical theatre.  She has not decided what school she will be attending next year, but she explained that the process is incredibly long when auditioning for musical theatre programs.  In ten years, Maura sees herself living in either New York City or Los Angeles as a working actress; however, she is confident that she will end up exactly where she is supposed to be.

“My favorite part about performing is the impact my art can have on other people,” Maura said.  “Through theatre, I am able to experience and tell so many different stories myself, but I am also able to provide an escape for all types of people. People from all situations and places come to see art and my favorite thing is to be able to steal them from reality for a bit, allowing them to be completely invested in the story and forget about anything else.”

Maura simply has a passion for people and telling their stories through art as well as developing a connection and devotion to the character who she is playing.

When Maura was in her freshman year, she did not have a plan or path for her musical theatre career.  She explained that it has been a whirlwind of experiences and is very content where she is now at this point in life.

“I have made so many new friends and have strengthened relationships through theatre.  There is a certain, special bond that you get with someone when you’ve done a show together,” Maura said.  “When you’re acting or performing, you are constantly giving each other so much energy and emotion that you don’t often get in real life.”

Also, she was required to attend the rehearsals with the rest of the cast, which were held almost every weekday January through March.  There she worked on the musical’s scenes, blocking for the acting, and characterization skills.  Maura attended dance rehearsals as well, specifically for The Little Mermaid, where she learned the numerous dance numbers.  She was also expected to practice these at home.

On top of all that, the cast had vocal rehearsals.  Again, she was expected to practice on her own, but this is where she had to opportunity to learn all the songs.

When asked about her biggest influence, Maura said it is her mother, Kathy Gill.

“She has inspired me to follow my dreams no matter how big or small and savor life on the way,” Maura said.  “She pushed me to work hard and has supported me in [anything that I have done].  Without her help, there is no way I could be where I am today.  I learned how to live a happy life because of her.”

Maura explains that she loves working with her peers through musical theatre.  She had the opportunity to meet so many people as was lucky enough to be a part of such a passionate program.

“It truly amazes me to step back and look at all of the things that my friends and I are accomplishing and the musical has helped me see this even more,” Maura said.  “Often times, people have lower expectations for high school shows, but we were all so determined to prove these people wrong and by working together and I think we succeeded.”

In The Little Mermaid, Maura’s favorite scene was when Ariel first got her feet and legs.  She explains that because this was such a big number, it was enjoyable to sing with the seagull characters, which some of her friends portrayed.  During the scene, the characters sung “Positoovity.”  Maura said she found a child-like, carefree dynamic within Ariel because of the way she acted toward her newly discovered legs and was able to laugh on stage. 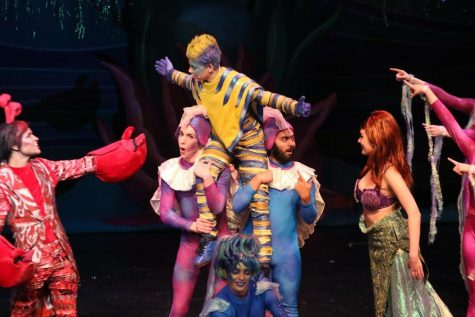 “There is truly something special about being on stage with a group of your peers, sharing your energy with each other and the audience, and genuinely being so happy” Maura said.  “It’s moments like these that I will remember forever.  [I love] the moments of pure joy shared with my friends who are like family.”

Maura would like to thank everyone profusely who has supported her through FHC’s theatre program and other arts because it often overlooked and is essential to our world.

Theatre Director and FHC teacher Robbin DeMeester has known Maura for four years now.  She explains that she has had the opportunity to watch Maura grow through many different aspects.

“Maura, being the person and performer while they’re one in the same, both have very strong work ethics and are introverted people,” DeMeester said.  “She is very focused because her level of talent is so far beyond anyone else who has ever come through my program.”

“On stage, you can see that she and her art is a whole different level when she performs,” DeMeester said.  “She is focused, driven, and talented.”

DeMeester continued to explain that students do not come to high school and end up great.  Maura has been working on her talents she was four years old when she started dancing.

Maura never gave up on her extraordinary talent when her peers began getting involved with other extracurriculars or because performing became hard.  Furthermore, DeMeester explains that Maura is so great because her talent and love for performing began at such a young age as opposed to students who fell in love with theatre when they entered high school.

Demeester continued to explain that Maura is very professional and very aware of other actors.

“She isn’t in it just for fun, just for the game, or just to say [she did] her high school show,” DeMeester said.  “She is in it to be committed to a role to add to her resume to grow as an actor.  For Maura, [performing] is long term.”

Over the course of four years, DeMeester has seen Maura grow in confidence on stage.  She has always been good at what she does, but as progressed in terms of self confidence as she did vocally.

DeMeester said that she has grown even stronger as performer since her role in last year’s musical production of Beauty in the Beast, which she was already fabulous in.

Maura has worked with numerous dance, vocal, and acting coaches to have the level of success she has now.  Not everyone is willing to do so because not everyone wants it as badly as Maura and that is what makes such a successful actor.

“She is the quintessential Disney princess,” DeMeester said.  “In ten years, if she wants, she will be living as an actress.  [She] has talent, professionalism, and commitment to her art.”

DeMeester continued to explain that anyone who has ever worked with Maura is excited for her future because she is someone who others have confidence in.  It is a combination of hard work, talent, and drive that has allowed Maura to be in the position she is in today.