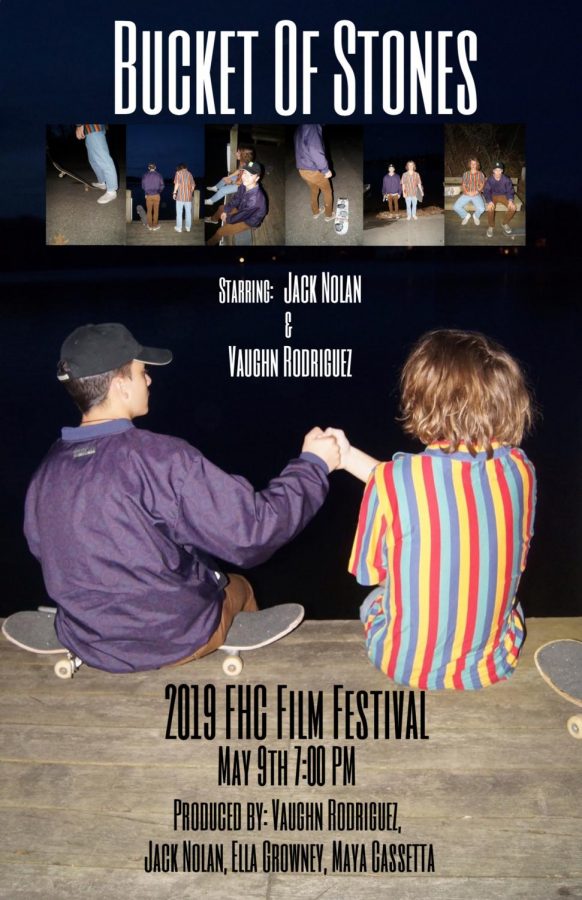 “My film is about two high school seniors who are challenged with school bullies, lame teachers, and decisions that are going to affect the rest of their lives. Match these struggles with comedic relief and you have Bucket of Stones.”

“I would say the theme of my movie is coming of age/transformation. The reasoning is that the two main characters, Wes and Ray, are forced to adapt to new ways of life and overcome obstacles, big and small.”

“I took a lot of inspiration from Fast Times at Ridgemont High, Dazed and Confused, Tenacious D, and other movies similar to those. Also, Scott Pilgrim vs. the World inspired the school bully, Derrick.”

“The filming/editing process was fantastic. I had the opportunity to work with Ella Growney and Maya Cassetta. They both filmed the entire movie and edited as well. There was a little bit of frustration between cast and crew, but [it was] nothing we couldn’t handle.”

“It was easy to choose actors just because when Jack Nolan and I had this vision we knew that it’d be us who could portray these absolute morons. It was also beneficial that the lead roles were in FX so we didn’t have to track people down when we needed to film. Availability was ultimately the deal breaker when casting this film.”

“I loved working with people who have such bright minds. It was great to bounce ideas off each other and find the best possible angle, song or anything that’d make our film better.”

“The main message I’m trying to convey is to keep your friends close and your brothers who have seen you at your best and worst closest. I’m trying to show the audience that conflict shouldn’t destroy the memories and friendship crafted through years of hanging out. Also, truth is important with friendships. Being truthful up front can save you a lot of grief down the road.”

“There is in no way shape or form a movie similar to mine on this years lineup for Filmfest. There are a lot of great ones but I think mine is separated from the rest due to the fact that it is very real. Watching the film, I recently found that all of these things have more or less happened to me. They literally happened in the movie, but when you think about it, in reality, all of these things can happen or did happen to someone along the way. There’s a crazy teacher? Yes. School bully? Sure! Best friends that skateboard together? Of course!”