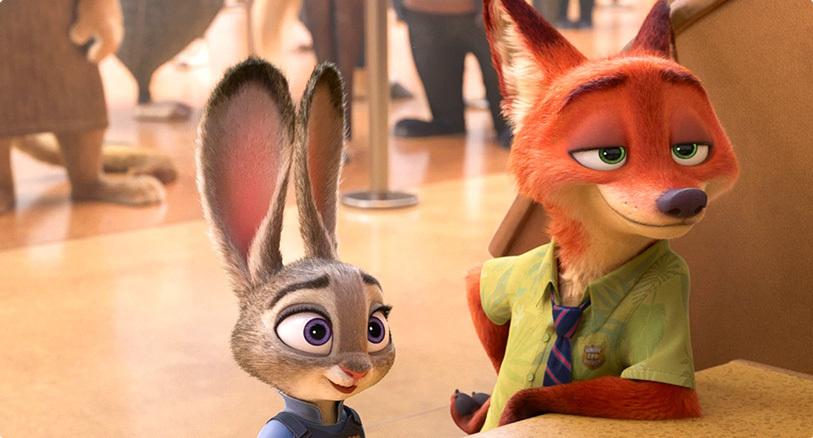 Zootopia: Not Your Stereotypical Disney Movie

If you know me, you probably know that I go to the movies a lot. So on the last Saturday of spring break, when the neighbor girls suggested we all go see Zootopia together, I was excited. I was ready to drown out the stress of heading back to school with a bucket of delicious buttery popcorn and a two hour, mind-numbing, happily-ever-after themed Disney movie. That’s what I was expecting, anyway. I wasn’t planning on getting so emotionally attached to a bunny and a fox and this entire alternate universe where animals have jobs and run the world. But that’s exactly what happened.

The storyline is that Judy Hops (Ginnifer Goodwin), a small town bunny from a carrot farm, has always wanted to be a police officer. However, even from a young age, she’s been told by everyone in her life that her dreams are nearly impossible, and bunnies aren’t supposed to have dangerous jobs. Despite everyone’s discouragement, Judy graduates top of her class at the police academy and heads for her dream home in Zootopia, a seemingly perfect city where “anyone can be anything.” But, on her first day on the job, Judy discovers that her fantasy land isn’t all that it seems to be.

The thing that makes Zootopia stand out among other Disney movies is that it brings light to a topic that I feel like everyone is always avoiding discussing: stereotypes. And by that I mean that yes, we talk about them. We joke about them and say simple things like if a girl is getting coffee from Starbucks, she’s being a “basic white chick,” or we think that boys should be tough and work harder than women, or sometimes we might make a mildly racist joke that on the surface, seems entirely harmless. But do we really stop and think about how much they hurt?

There’s a scene that stands out specifically to me that really brings light to this. The main character, Judy is talking to her friend Nick (Jason Bateman), who is a fox, and he tells her the story of how as a little kid, all he wanted to be is a Boy Scout. He had to recite a code of honor as part of initiation, but because foxes are labeled as cunning and tricksters, the rest of the group laughed at him and wouldn’t accept him. He was kicked out, muzzled, and ridiculed simply because he was the only predator in the group, and because of the stereotypes of his species.

As a huge fan of Disney movies myself, I was ecstatic that an animated children’s film was calling attention to a huge issue and teaching kids to be kind and not judge each other. My eight-year-old neighbor girl came with us older girls to see it again, because she loved the movie that much the first time. After coming out of the theater, I asked her what she thought of it the second time around, and she said it was still one of her favorite movies of all time. She wanted to go back and see it a third time, thus proving just how epic this movie truly is.

As per usual, Disney has done it again with making a fantastic animated film that is a hit for all ages. If you haven’t seen it yet, please go this weekend and see this beautiful and magical movie. I’m positive that you won’t regret it.