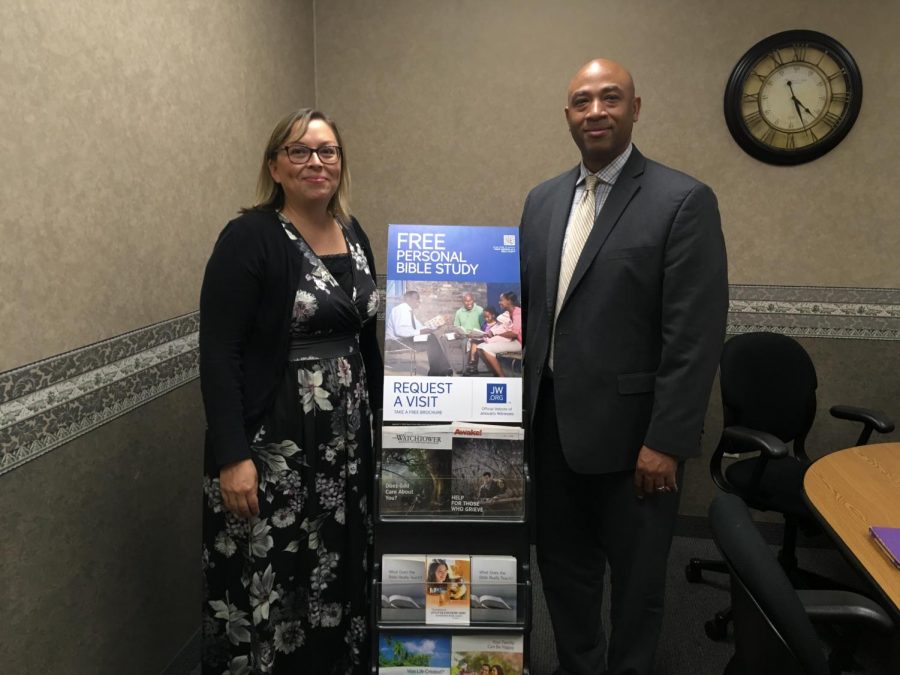 Kevin and Jodi Dean stand beside one of the carts they use when they go out to speak to people in the community.

Kevin and Jodi Dean met me at the front doors of the Cascade Kingdom Hall of Jehovah’s Witnesses. Behind them, wearing their Sunday best, stood two young children.

When I first contacted members at the Kingdom Hall, I hadn’t yet realized exactly how their system worked. There is no “pastor” or “priest” — no sole religious leader with whom I could meet. So instead, I met the Deans.

They ushered me inside and led me to a small room with a conference table in the middle. A clock hung from the far wall, and some cupboards lined the other side of the room. The walls were a soft beige, and the furniture simple — sturdy. It wasn’t an office with a desk. Just a room with a little oval table.

We sat and began.

Q – Please give me a brief description of what you believe.

Kevin – “As Jehovah’s Witnesses, we are a Christian religion. We believe that Jesus Christ is our savior, that he died for our sins. He’s a ransom for mankind—which is based on what the Bible says in John chapter seventeen, verse three— that God sent his only begotten son in order that all those who exercise faith in him have salvation. We believe that Jehovah is God’s name, that Jesus and Jehovah are not the same, but that they are separate individuals. We also believe that Jesus told his followers that they should go out and preach. And so we try to follow that admonition that he gave his apostles when he was on earth. And we believe that the Bible is God’s word, and we try to live our lives by it. And we believe that when you live by Bible principles, you make your life better now.”

Q – What drew you to the Jehovah’s Witnesses?

Q – What was it like growing up as a Jehovah’s Witness?

Jodi – “[Although] I was raised in it, I still had to make my own choice to become one of Jehovah’s Witnesses. I had to study and decide, is this what I want? Is this what I really believe? Not just what my parents believe. Having said that though, because of [my parents] being Jehovah’s Witnesses and making their decision and because we lived by Bible principles, that affected how I was raised. I was raised in a loving home to parents who were committed to being married and following the principles to the best of their ability. I grew up in a congregation where we had different races even though the town we lived in didn’t, and I grew up having friends of all different ages, races, backgrounds, you know, I got to see that this organization is actually a worldwide organization.

It’s really cool because I could see that no matter what the background was or what country they were from, we all have certain things in common. The beliefs are the same whether you go to a Kingdom Hall here in Cascade or you go to one in Japan or England or Australia. And so I think that was one of the things that I thought was really cool was the unity and you don’t have these political barriers. You don’t have racial barriers. You don’t have that friction that we see a lot among, even, other religions.”

One of the big things you notice when you first walk into the Kingdom Hall is the presence of languages other than simply English. The Kingdom Hall in Cascade boasts English, Chinese, and American Sign Language. However, hundreds of languages are present on their website.

Q – What’s it like to have that mixture of communities?

Kevin – “I think it really goes back to the fact that the Bible says that God is not partial, but anyone who seeks to serve him is acceptable to him. And so that really just proves that the Bible and living by it really has this ability to unite people. It’s not a divisive thing. And when we base our beliefs on the Bible, it doesn’t matter where you’re from, what color you are, what language you speak. It really gives us a pure language that unites us because we all worship God.”

Q – How do you believe your faith affects the community in which you live?

Kevin – “I think one of the biggest ways that it impacts the community is through our preaching activity and the work that we do. We make it our goal to reach everyone within the Cascade area and go and visit people at their own homes. And when we do that, we find that we talk to people who have various challenges in life, you know, they have, perhaps, some family challenges or they have money problems or they have health problems. And for us to be able to spend some time with people showing them comfort from the Bible, we feel that that has a major impact on people, whether or not they choose to become one of Jehovah’s Witnesses or not. We really care for people, and we want to give them comfort and hope for the challenges that they face on a regular basis.”

Q – What is the biggest stereotype your faith faces as a larger community?

Kevin – “That we are not Christians and that we don’t believe in Jesus.”

Q – What are some prejudices Jehovah’s Witnesses face?

Kevin – “You have to keep in mind that as Jehovah’s Witnesses, we’re a worldwide organization. So, for instance, in Russia Jehovah’s witnesses are being persecuted violently. They’re thrown in jail for no reason, just for the simple fact that they’re reading the Bible together.”

Jodi – “And that happens all around the world where Jehovah’s witnesses are persecuted now just because we want to study the Bible, we want to get together and talk about it, and we want to share our beliefs with others. And because of that, Witnesses are extremely persecuted, but we expect that because Jesus said ‘all those who believe in me will be persecuted.’ There are currently five countries that have our brothers and sisters in prison, not for protesting, not for resisting the government, not for breaking any laws other than just peacefully meeting together.”

Q – How has being a Jehovah’s Witness changed you?

Jodi – “It really does just make us all-around better people—just happier in general. I’m a better mother, better wife, better sister, a better daughter, you know? We can enjoy unity. So there’s a lot of peace that comes from that. You know, we still live in a world that’s anything but peaceful. We still deal with issues that are not always peaceful. There are still people with mental illness in our organization and things like that. We still deal with that. But the difference is our outlook because we’re taught to live a certain way we’re going to be more patient. We’re going to be more forgiving with one another. We’re going to overlook things. And so do we still have problems? Of course, that’s still going to happen, but our outlook, in general, is better. And then when we work to apply those principles, things just go better. We make better decisions, which then provides a better outcome, which means, in general, we’re happy.”

Next, I asked the question that has been laughed at every time I’ve asked it so far. And it got laughed at again.

Q – Do you feel a need to be perfect?

Kevin – “That’s impossible, right? No one can be perfect. The reason that the world is in the condition that it is is because of imperfection. So, we know that we can’t be perfect. We do the best that we can. Of course, we all make mistakes. We can’t even perfectly live up to the Bible principles and standards. We try to, to the best of our ability. And that’s one of the reasons that we meet together is to continue to refine ourselves and try to help each other get better. So, we can’t be perfect. But, we believe that, in the future, our Jehovah God is going to make a change to the earth and bring back man into the perfect condition that he initially intended for him. But until then, we’re just imperfect, and we do the best that we can.”

Q – Is there anything you would like to tell the community about Jehovah’s Witnesses?

Kevin – “You know, I think there’s a lot that could be said about Jehovah’s witnesses. Again, the biggest thing is that we believe what the Bible says as God’s word, and we do our best to live by it, and we try to help others benefit from it.

And I think one of the things about Jehovah’s witnesses is [that] our website is unique. There’s nothing like it at all. I mean, of course, there’s a billion different websites, but our website is truly unique because of the amount of content that it has on it, the various languages that it has on it. And it has something for everybody. There are videos; there’s music. Obviously there’s a lot to help explain the Bible. You can read the Bible online; you can listen to the Bible online. So our website, JW.org really is a great tool for people to learn more about the Bible, more about Jehovah’s Witnesses, more about life, about the challenges that we face. And so really a big part of who we are can be found on the website.”