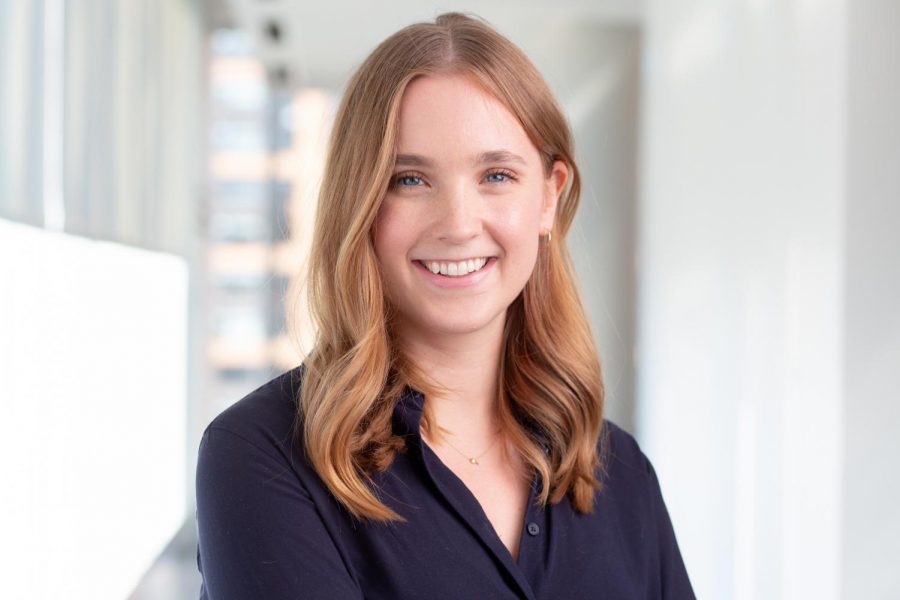 A young Gabriela Saldivia sits in the passenger’s seat of her father’s car. Soccer practice has finished for the night, and the two of them are driving home in the coming twilight. Playing over the radio is NPR —the background to many of Gabriela and her father drives together.

At the time, Gabriela had no idea that one day it would be her voice filing late-night drives.

“I did grow up listening to NPR, mostly in the car with my dad,” Gabriela said. “Actually, sometimes when I hear the All Things Considered theme music I get transported back to that feeling of being in the car with him, driving home from soccer practice or whatever. But, I don’t think that’s what drew me to NPR.”

It wasn’t until college that Gabriela realized that while she didn’t find NPR to be “anything special” as a child, it had made a big impact on her development and the person she became.

“It wasn’t until I got to the college radio station that I realized all those years of listening to NPR helped me understand the world and made me a smarter person,” Gabriela said.

Listening to NPR, however, wasn’t journalism’s only expression in Gabriela’s young life. While she was in high school at FHC, Gabriela participated in the school newspaper —which was, at the time, called The Forest Edge.

“I had no idea what a journalist really did before I took Mr. George’s class,” Gabriela said. “As a curious person, I loved that I could research a topic, talk to people, and then write an article—for a job.”

When Gabriela graduated from FHC in 2011, she went on to finish her schooling at Michigan State University. As a journalism major, Gabriela was sure that she would go onto work for the university’s newspaper. However, her life took a slightly different direction and placed her on the path she follows to this day.

“My first week of college I went to a networking fair for freshman and was immediately drawn to the table for the student radio station,” Gabriela said. “I signed up because they were looking for volunteers for their news team, and after my first meeting, [I] fell in love with the station and the possibility of all I could do there.”

It was in the “a bit grungy and literally underground” Impact 89-FM station that Gabriela began to develop a whole new journalistic passion.

“It had all the payoffs of a professional environment, but being student-run made it a place to experiment—to try new things and fail, and then try again,” Gabriela said. “There, I learned the way to gather and edit audio and how to build a narrative story arc with sound. Some of my first stories were pretty rudimentary, but they aired on the radio which was pretty spectacular to me. I learned how to work on deadline, [on a] outside of a classroom assignment, on something that was really important to me.”

“I stayed there for the rest of my time in college,” Gabriela said, “eventually progressing from a volunteer, to the News Director, to the Station Manager. I’m so glad I was open to taking a risk and trying something new with the radio station because I definitely wouldn’t be at NPR today without that experience.”

After graduating from Michigan State University, Gabriela’s internship with NPR evolved into a temporary and then a full-time position. During her time with NPR, Gabriela has filled many different roles. She has worked as dayside producer, done stories in the field, reported long-form feature stories, directed the live show, produced the podcast Up First, briefly worked as the producer for Hidden Brain (where she wrote and produced podcast episodes), and then finally came to her current role with NPR One.

NPR One is the audio app for NPR where Gabriela is currently a producer in the newsroom working to find new ways to represent NPR on up-and-coming news platforms.

“It’s a role where I get to think a lot about the changing world of journalism and the ethics that are involved in working with that new technology,” Gabriela said. “My job requires me to spend a lot of time working with reporters and producers to repackage and rewrite their radio content for digital platforms.”

The fast-paced world of journalism, however, doesn’t let Gabriela just stay in one position.

“On the weekends I occasionally work as a fill-in reporter for the Newsdesk at NPR, covering breaking news stories from all over the world for NPR and the national newscast,” Gabriela said. “I do it to keep my reporting skills up since I don’t do much reporting in my day job.”

During Gabriela’s time with Morning Edition, she was granted the opportunity to work on an international story in Russia with one of the hosts of the show: David Greene. The purpose of the trip, taken in 2017, was to cover a variety of topics ranging from the rare anti-government protests of the time to the Russian involvement in the 2016 U.S. presidential election.

However, while in Russia, Gabriela and the team were presented with a story that would become the winner of a National Edward R. Murrow award and show Gabriela the way that her job as a journalist really did make an impact on the world.

“While we were there, we set out to report on a story that hadn’t been covered much by the media,” Gabriela said. “Gay men were being rounded up and tortured by police in Chechnya because of their sexuality. We were able to talk to a few of them and share their wrenching story on Morning Edition. Before this, I had never traveled internationally for work, and it was a humbling experience to take a little-known, horrific story and bring it to an American audience. It was a time where I could see the real impact of a story I worked on.”