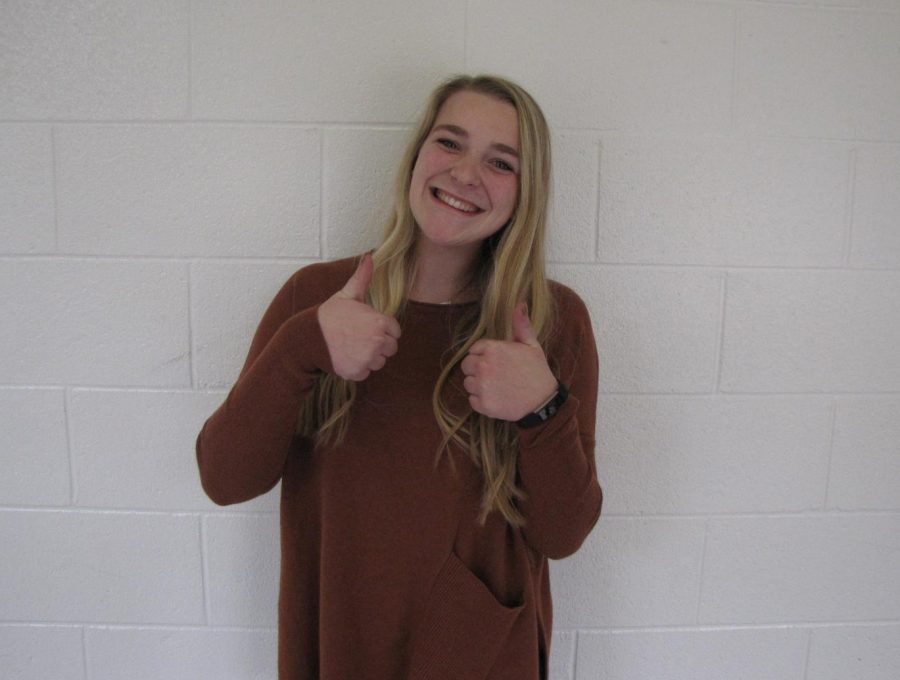 1.  What part of being in the play makes you the most nervous?

“The things that make everyone nervous: forgetting a line, missing a move, not embodying the character as well as I can. It’s the fear of embarrassment or of messing someone else up. I want to be able to be there for the rest of my team, that is the cast, and I don’t want to mess up for them.”

“I feel that everyone looks up to and respects Mrs. DeMeester so much that her presence is enough to spark passion and commitment to the role. But beyond that, it is the pep talks and guilt trips. One minute she will be praising you—general “you”—then stating that you need to be better and work harder. Each works in its own way and leaves you feeling motivated to be better.”

3. Are you nervous about forgetting a line?

“Absolutely. It is one of, if not the most, stressful part of acting—standing up on stage not knowing what to say or what to do. It is not only a disappointment for yourself but for everyone that has worked so hard for this show. I have known my lines for weeks now, and I still practice during lunch and in my downtime at rehearsal.”

4. What emotions do you think you’ll feel on opening night as the curtain opens?

“I mix between nervous and excited—”nerv-cited,” if you will. We have put so much work into this show that I can’t wait for others to experience it, but the fear of screwing up will always be there, probably more present than it ever has been before.”

5.  If you could switch roles with anyone for one performance, who would it be and why?

“Probably Abigail or Mary Warren. They get to scream and show a lot of emotion. Whereas my character, Rebecca Nurse, is calm and level headed, their’s are hysterical and emotional. It would be fun to get to lose it on stage or really be able to act and get caught up in the show and the hysteria.”

“Honestly, Rebecca is just an extreme version of me, at least that’s what many people say. She is calm, sympathetic, kind, compassionate, and nonjudgemental to a fault. I have been told I can not have any hint of judgment in my lines. Rebecca Nurse is the extreme version of wholly good, and I do not think anyone can be as kind and morally perfect than she is.”

7. Who is the funniest person on the cast and why?

“Linus. He is so sweet but always makes me laugh. In the show, he uses a Bill Cosby book as a book of spirits. One day, he opened to a page full of pictures of Cosby and continued to point at them and name the spirits. Everyone on stage could not contain their laughter, and we had to stop the scene because none of us could stop laughing. This moment along with the countless dance moves, faces, and voices lead me to crown Linus Kaechele as the funniest in the cast.”

8. How do you “get into character” before the play starts?

“Honestly, I just try to breathe and be calm. I have to search for my motivation and put myself in the mind of an older woman who is wise and caring. There is not much that I have to do. Most of the time, I will just repeat my lines in the wings to get into the character.”

9. Whom would you like to thank for their support as opening night approaches?

“I would like to thank our director Ashley for putting so much of her life and time into us and this show; Mr. Curtis, for all of his notes and advice; Mrs. Demeester for her support and motivation; my family for dealing with me not being home ever and supporting me through my love of theatre; finally the cast and crew for making me laugh and creating such a supportive and fun environment. When I got cast in the show, I never expected to find love and joy in Salem. Thank you all for creating that for me.”