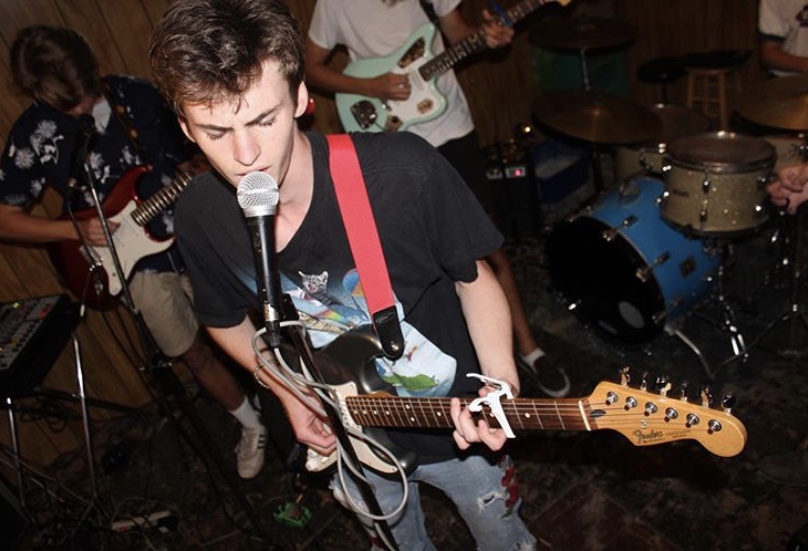 Micah Baron, lead singer of Pay with Pesos and junior at East Grand Rapids High School, has always had an affinity for music. With an air of confident swagger combined with the seemingly effortless way he belts out mesmerizing melodies, it’s not hard to tell that this type of artistry is where he is most comfortable. His history with music dates back to years even prior to middle school when he was involved in choir and enrolled in guitar lessons. Even then, he said, his dream was to be a rock star.

“I’ve always been a creative person,” Micah said. “I just gravitated towards music because I thought it was cool, and it connected with me most. At some point, it turned into a thing I [did], and I got good at. [Then], I started to take it [more] seriously and look at it as something that I wanted to pursue long term.”

As this dream of becoming a face in the realm of music became more and more reachable, Micah and his friends—now turned bandmates—decided to do something productive with the copious time they were already choosing to spend together.

“We’ve all been friends since middle school, so I think it’s important to keep in mind that we’ve been hanging out as a group of guys long before we were ever trying to do anything productive,” Micah said. “We just decided one day, ‘Hey, let’s get together.’ We realized that we could make something happen, and it turned out that it worked.”

Micah began to carve out his role as a singer/songwriter in Pay with Pesos and states that his lyrical process stems from a more personal part of him.

“Most of the songs I write are just stories,” Micah said. “A lot of times [they] will come out of something in my life. I just try to make stuff that will connect with people. I think when the music really speaks to people, it finds a way to get around.”

And, sure enough, it does. Even though the band has only been playing shows for upwards of six months, their fanbase is ever-increasing. According to him, along with social media, of course, most people find out about their songs and shows through word of mouth. The band’s roots in the East Grand Rapids area certainly helps this, and Pay with Pesos partially attributes their success to the community that surrounds them.

Regardless of the following that encompasses him and the other members of the band, Micah remains true to his humble first intentions for Pay with Pesos. While he admits that it can be a bit uncomfortable to know that these people with whom his life is so closely intertwined with are watching him throughout this creative era of his life, he still chooses to do what he believes is most important: connect.

“I’m so appreciative of all the support that we’ve gotten,” Micah said. “[Whether it’s] playing live or our releases, people [are] really engaged with what we’re doing and appreciating it for what it is. It’s interesting; there’s nothing else like it. It puts [me] in a weird position as an artist because all I’m trying to do is connect with people.”