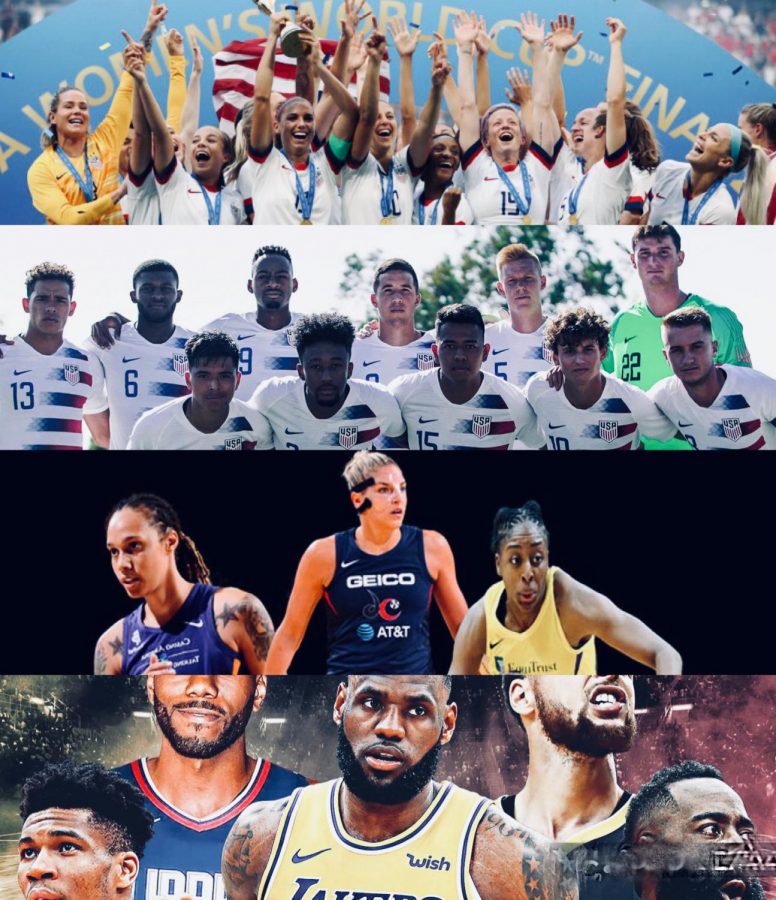 For years, even decades, there has been constant debate over the matter of boys and girls sports. Controversy over the line that draws the distinction between the two has been a fire that ceases to burn out.

The contrast between the two—whether it’s pay, reputation, attendance, support, credit, or opportunity—remains something prominent worldwide. It is obvious that equality lacks in the means of girls and boys sports.

While several things have changed since the beginning of sports, continuingly moving in a positive direction, there are still too many things that exist as unfair inequalities in the world of sports—most of the time with girls on the lower end of the scale.

One of the most debated issues among the topic of boys and girls sports is the pay gap between genders for the same sport.

On average, women in the WNBA make a salary of $75,000 per season. The average NBA salary is $7.7 million per season.

This is an extreme pay gap. We aren’t talking thousands, or even tens of thousands; we are talking millions of dollars of pay differences between the WNBA and the NBA.

In my eyes, a sport is a sport. Boy or girl, if you have the skill to succeed to great extremes then you should be rewarded in the same way. Honestly, there are probably some WNBA players who could compete with some NBA players.

So, why the pay gap? Why the extreme inequality between the two sports?

The answer lies in another inequality between girls and boys sports: the attention which is brought to them.

For years, the NBA has grown its business. It has created icons that are known around the world, players as aspirations for young kids. People know the names of the top guns in the NBA.

Meanwhile, the WNBA hasn’t had the same luck. It’s not often where you will hear a WNBA player’s name and recognize it simply because the attention of the mass public has not been focused on the league. Contrarily, most people could name at least three NBA players off the top of their heads.

The NBA gets more attention—much, much more attention due to this platform that has been built around men’s basketball. I would honestly argue that the NBA even gathers more attention per game than the WNBA gets in most of their overall season.

This includes more attention on the news, on ESPN, at actual games, and on TV. And in today’s world of business, more eyes means more money. Therefore, since the overall business of the NBA is more successful than the WNBA, the players get money—and, in this case, a lot more money.

Is the way this all plays out, no pun intended, fair? Absolutely not. But with the way in which business now works, it is how the pay gap is determined; success in grabbing the public eye equals more revenue, and more revenue equals more pay. The big question is how do we fix this broken system of pay when it’s based off a business which is already woven into society?

The reasoning for this is the same as the reasoning for why the NBA men make more money than the WNBA women. The women’s US National Soccer team gathers more public attention, more people watch them and pay attention to the news that surrounds them—more people know who they are.

Once again, if you asked someone who pays somewhat attention to sports, I guarantee they could name at least one player on the women’s National team, if not more. However, if asked to name a player on the men’s national team, even I would be in trouble, and I play soccer.

The US women’s National team is more known, people pay much more attention to them. And as I said before, with more recognition comes more revenue. The women bring in more money than the men do, so therefore they get paid more.

While these gender inequalities exist in professional sports, they also exist in the hallways of FHC.

Football here, and honestly at every high school, is the sport that captures the most attention and gathers the greatest audience. There isn’t another sport which gathers nearly as many people; however, those which are closest tend to be other boys sports.

However, similar to how it goes in the professional world, attention between sports can alter between boys and girls.

Boys basketball at FHC is definitely the runner up to football when it comes to the greatest audience and most attention. While over several hundred people often attend a boys basketball game, only a fraction of this number attend girls basketball games.

On the other hand, when it comes to soccer in recent years, a lot more people will tend to show up at a girls soccer game versus a boys soccer game.

So, where does the real inequality between girls and boys sports really lie? In most cases, the boys are on the advantage end of the scale, but there are times when girls find themselves at an advantage. There exists both underrecognized boys and girls sports as well—like dance team and wrestling—the opinion just depends on which under-recongition we give more argument or attention to.