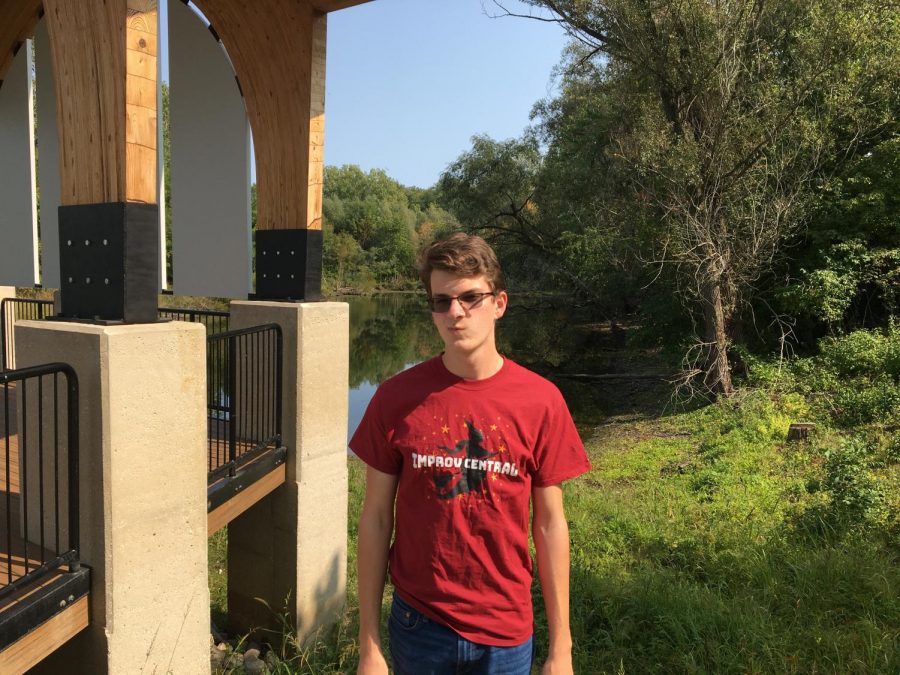 “It’s kind of nice that it’s only a one-act play, which is a lot [fewer] lines to memorize. Having a smaller cast is easier because it’s easier to organize people, and it’s easier to get everyone together and just have everyone knowing their stuff. It’s also not as fun because it’s just nice having a larger cast and getting to work with more people. There’s no real middle ground as it is; people either have small roles or big roles, and it would just be nice to have a larger cast that is more like in-between stuff.”

“I think we all got a little bit type-casted for this one. So Zach and I are the two narrators, and his narrator is put together and orderly and mine is kind of a mess—that lends itself really well to what I’m like as a person.”

“So, with face coverings, there are two options: our masks or the face shields. And for the performance, we’re going to be wearing face shields, which means you can’t move as much or as quickly because they’ll slip down or slip off. I personally just don’t like wearing the face shields, but then, with masks, I have enough trouble enunciating as it is. When I have a mask on over my face and I can move my chin up and down or speak as clearly, it does not help the ability to understand me.”

4. What is your favorite part of being involved in the play/theater program?

“Honestly, I really like working with other people and getting to the point where we have our stuff down. You can have this strong repertoire with other actors and kind of have these scenes go really well, and when you get something done the first time, it’s really good. Just having lines memorized, having people actually moving and doing acting stuff, and just having that all come together for the first time is such a great moment.”

“The one that comes right before Rapunzel is a conglomeration of like eight or nine of the Brothers Grimm stories, and that one’s really good.”

“How well it came together. I thought there was going to be way more difficulties with getting all of this together and rolling, but people have been really on top of getting memorization down. It’s a comedy, and the comedic timing of pretty much everybody has just been on point for pretty much the entire time. There have been some people that had to do a bit of work and they absolutely have—they’ve just gone all out into it. So I guess I’m just really, really pleasantly surprised at how well this has come together and how good of a show it’s ended up being.”

“So one thing that is fairly unique, well it has been done in other FHC plays, but we, Zach and I especially, break the fourth wall and talk to you guys, and you talk back to us and participate in the show—I think people should be looking forward to that. It’s a fast-paced show, it’s really funny, and it’s not serious at all. You guys get to participate back into it at a couple of points.”