Freshman Lance Childers had an incredible season this year on the boys JV soccer team. Lance played goalkeeper throughout the whole season and excelled at it. Later in the season, the varsity team made some adjustments with their lineup due to some injuries, and Lance got pulled up to start at goalie for varsity’s second and third round conference tournament games.

“Lance is a phenomenal communicator and good with the ball at his feet, and as a defender, I felt very comfortable with him behind me,” said Senior Matthew Mahoney. “Even during the season when he scrimmaged against us on JV, you could tell he was a great player by some of the saves he made despite his shorter stature.”

Lance was one of JV’s best players and showed it the whole season by playing with great communication and energy every game. Lance also played some forward during the season, and his exceptional footwork allows him to play multiple positions on the field if needed.

Sophomores Devin Holcomb and Noah Kreikard had excellent seasons on the varsity tennis team this year despite dealing with the challenges of COVID-19. With fewer tournaments and other restrictions, the two improved throughout the season and tied for the OK White flight champions at four doubles. They were also the only four doubles team in the conference to beat eventual state champion Forest Hills Northern, and they also had a strong win over Midland Dow.

“It was a great time playing with Devin this year,” Noah said. “I’m really looking forward to next year.”

“Noah and Devin both have lots of potential for years to come, and I hope to come back to watch them succeed,” senior teammate Ben Koning said. Overall, the team took second place at the OK White Conference tournament and third place at the Division 2 state tournament.

Junior wide receiver Ben Scholler had a season to remember. In arguably his best game of the season against Mona Shores, he had 6 receptions for 98 yards and some big third and fourth down catches when the Rangers needed it most. Starting out the season with an insubstantial role in the offense, Benny worked his way up to become one of FHC’s premier targets on offense.

“Benny is not the biggest, fastest, or strongest of our receivers, but he is the most reliable,” head coach Tim Rogers said. “He catches everything that is thrown to him.” 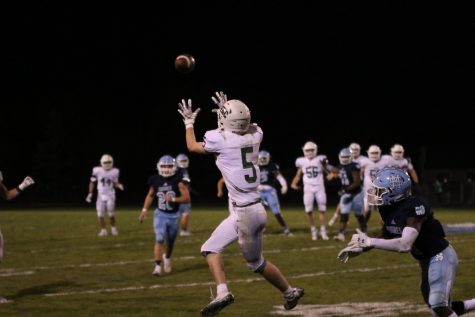 Freshman JT Hartman had an incredible season this year playing up on the JV team. Although the season was cut short due to COVID-19, JT still made the most of the games he played. JT scored a touchdown in every single one of his games and had a number of games where he had multiple. JT was the go-to man for the Rangers the whole year and proved that even as an underclassman, he had the potential to make a major impact. JT always ran for substantial yardage whenever he got the ball and made great plays on the defensive side as well. Against Northview, JT had a game to remember as he ran for two touchdowns and made plenty of great tackles. He also played very well against East Grand Rapids, as he ran for a touchdown and multiple long runs to help the Rangers defeat the Pioneers.

“JT had excellent footwork and strength when he carried the ball which helped him make a lot of big plays,” sophomore teammate Raymond Cargill said. “JT has lots of potential, and I look forward to playing with him for years to come.”

After the JV season ended on a win against Thornapple Kellogg, JT got pulled up to play on varsity for the playoffs. Even though he didn’t see the field, it was very well deserved for him to be a freshman on the varsity roster.

Mason McDonald had a standout first year as the freshman football starting quarterback. He had multiple touchdowns on the run and had a lot of composure in the pocket. He also made plays when his teammates counted on him. He had a standout game against Byron Center, throwing touchdowns and scoring them on the run as well. Many kids on the team acknowledged the fact that Mason was a future star in this program. He had many games with minimal mistakes, and that’s what led the freshman football team to a 4-2 record. A lot of people are excited to see this team next year and see how much they’ve improved. Make sure to have Mason on your radar.