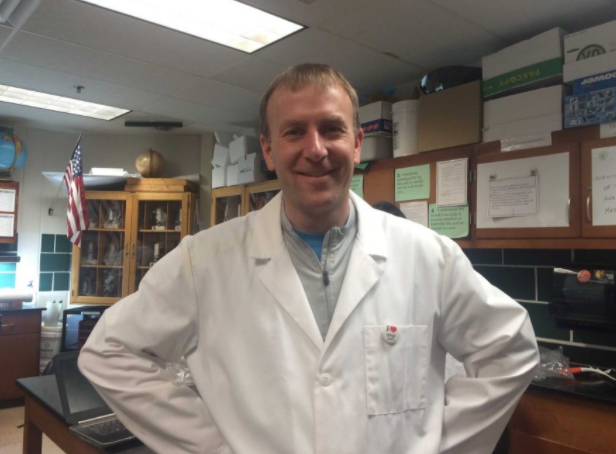 1. How are you acclimating to the switch to Canvas?

“For me personally, Canvas is what’s called a Learning Management System, which is a fancy website that allows you to organize a course. I’ve been using Moodle, which is also an LMS, for several years. For me to go from Moodle to Canvas, it wasn’t that big of a difference–it was just a different style. So, for me, I didn’t have a big issue switching from one to the other, but my concern is for the students; it wouldn’t be easy [for them] to switch over right in the middle of the school year.”

2. What does the teacher’s point of view of Canvas look like?

“It looks very similar to what [students] see. One option that we have as teachers is [to] potentially load all of my files and assignments at one time, and then I can hide them from students so [the students] are not overwhelmed. For the teacher, the filing cabinet is all there, but I’m only going to pull out one file at a time for the students. For next year, it becomes really nice because all those files will be there whenever we need them for the class.”

3. Do you feel like Canvas can cater to the needs of your classroom? If yes, more so than Google Classroom?

“If you look around and see who’s using Canvas in terms of schools and grade levels, Canvas is kind of a high school to college [platform]. There’s a lot of options for the upper grades. Elementary is more like Google Classroom, so there’s a lot of things you can do in Canvas that you can’t do in Google Classroom. But it’s so straight forward and so intuitive to be able to put stuff on Google Classroom. It’s taking more clicks and more time for a teacher and student to use Canvas. It’s obviously something that’s geared towards older students, and it’s really something you’d see in a lot of colleges and online learning. It’s designed so you would never need to be face-to-face with the teacher and you can do everything on Canvas.”

4. What do you believe are the advantages of Canvas?

“There are more options in Canvas in terms of things you can do; Google Classroom is just a place to turn things in. [In] Canvas, I can do a test, I can post an assessment, [and] you can actually have a video conference [in Canvas], which you can’t do on Google Classroom. Canvas does have a grading option built into it, and Google Classroom has that as well, but part of Canvas’s grading option [allows you to be able to] record your voice and record a video. Also, you can organize your Canvas page in lots of different ways.”

5. What do you believe are the disadvantages of Canvas?

“There are almost too many options in Canvas, and I think that would be a learning curve for the students. [Students] have been using Google Classroom for a long period of time. There was no new learning for Google Classroom each year. You just say, ‘Hey, I’ve done this since fifth grade; I’m going to do the same thing.’ What the parents wanted was ‘one-stop shopping’ for all the calendars, websites, and learning stuff to make it easy. The parents had a push for Canvas. Now, because Canvas has so many options, it’s going to take longer for everyone to learn it, especially those who are juniors or seniors who have known [Google Classroom] for so long. For a middle schooler who is learning it for the first time, they will be able to practice it throughout the next six years of their education. It’s also going to be hard for students to take stuff from their Google Drive and put them into Canvas, [especially because] it was so straightforward and seamless [for] Google Classroom. Students are not going to get rid of or get away from using their Google Apps; they are still going to use it to create their work.”

6. Do you feel like switching to Canvas has improved the structure and organization of your classes?

7. Was your initial view of canvas different at the beginning than it is now after some weeks of use?

“No, just because, as I’ve said, I’ve used Moodle for several years, and I’m familiar with that. I would say for a teacher who has never had a Learning Management System and just had Google Classroom, I’m sure their opinion would change using Canvas. But for myself and some other teachers who have used Moodle, Canvas is just kind of a different product doing the same thing. It looks a little bit different, and there are a few things that I feel Moodle does better than Canvas, but there are options that Canvas has that Moodle does not, so it’s basically like [deciding] what car model to drive; they’re both going to get you where you need to go, it’s just a matter of bells and whistles.”