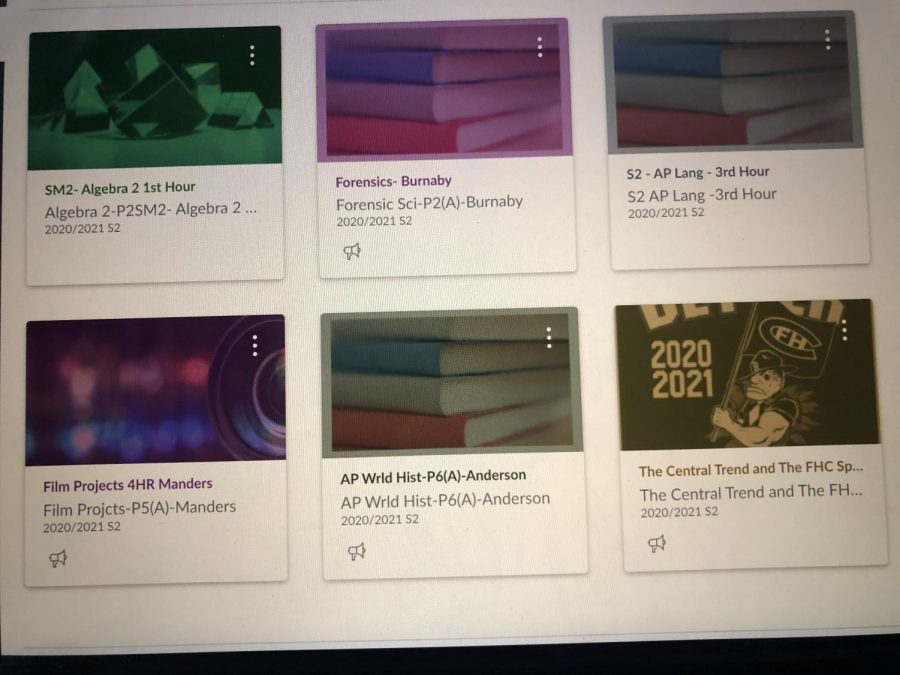 a picture of my Canvas dashboard

The switch to Canvas is a gateway for new opportunities

Since last spring, a few things have been made clear to the Technology Department, principal Steve Passinault, and counselor Kyle Perkins: we need a district-wide system that is more comprehensive and capable to aid in all students’ learning.

It may sound easy to find a new system, but this switch was months in the making, complete with discussions with other school districts and companies, as well as communicating within the district to reach a consensus on what platform best fit the needs of students, teachers, and families.

“Backtrack to last spring when we had to go all virtual,” Passinault said. “When the pandemic first started, the feedback that the district was getting from parents, and some students, [was] that teachers were using all sorts of different learning systems. The desire was that if we could get one centralized system, that all families could use, kindergarten through 12th grade in the district, it would be so much better for everyone to keep track of.”

Like Passinault, Perkins and the counseling department were getting similar complaints about frustrations parents and students alike were having because of all the different sites teachers were using.

“I think what the district started to realize is as teachers and subjects used more technology and more outside resources,” Perkins said, “a frustration from parents and students was just [that] they were going to so many different spots. DeltaMath, Membean for English—which are great resources, [but] it was one more thing they had to get to.”

While keeping in mind that they needed a more centralized system for students, parents, and teachers, the Technology Department got started on researching different platforms that could fit the bill.

Meghan Daniel, a representative from the Technology Department, described a few steps in the process of what it looks like on a technical end and how a district goes about implementing something this big.

After reviewing several different systems, Canvas seemed to be one that suited the needs of the district the best.

People have to do what they’re comfortable with and move at a pace that is in alignment with what’s best for kids, but also what we’ve committed to as a district, and that’s where we come together as a collective unit of educators to work together and make that happen.”

“The technology office [started] researching what other schools were doing,” Passinault said, “[and] what colleges were doing, and landed on Canvas as kind of the premier learning management system that a lot of other high schools and colleges were using.”

On top of meeting the expectations the district had in mind, Canvas has been used by other schools in the area—like East Grand Rapids—and nearby colleges—like Michigan State University.

The fact that universities in the area also use Canvas for their academics was seen as a giant plus for the program.

“We really felt like it served as an opportunity for a leg up for a lot of high school students who would be pursuing anything at the college level,” Daniel said. “To have that kind of exposure to a learning platform where you can go in and practice gaining access to your content, whether you were going to be learning in an online format or whether you were going to sit in a lecture. It serves as a point of contact for most courses at the college level, so it was a really great opportunity for us to bring that down and make it accessible at the high school level, too.”

According to Daniel, Canvas had several other pros associated with it, like the fact that it’s an app that can be downloaded on a variety of devices, its ability to download courses “so that access to learning is not inhibited by location,” the usability of the program, and it’s other capabilities.

Eventually, the hope for Canvas is that we’ll slowly get to the point where we can tap into all of its capabilities.

“I think Canvas will eventually be a really good thing for students and staff,” Perkins said. “From what I can tell, it’s supposed to streamline all the different apps, websites, and programs the teachers use and get them into one spot.”

As opposed to all the different websites teachers have been using, like Membean, DeltaMath, and other third-party websites like Zoom, Canvas will provide a one-stop-shop for all things school-related.

“It has a lot more possibilities,” Passinault said. “For example, we will eventually get to a point where we’re connecting teachers doing grading and Canvas, and it’ll automatically go into PowerSchool. There are some features of Canvas that allow teachers more abilities to have students in groups and things like that.”

The plan is to roll out Canvas’ abilities slowly to give students time to adjust and avoid feelings of being overwhelmed with learning a new system.

“The cons with Canvas are that when you have a system that is robust, that can feel overwhelming,” Daniel said. “What’s really key in how this rollout has been happening is that it’s in small steps. That’s why you’re experiencing teachers not using all the facets of the system yet, and that’s okay. We [are] excited to watch where they’re going to go, and we have some teachers that have totally done some amazing things already with their students and that’s possible for anyone. People have to do what they’re comfortable with and move at a pace that is in alignment with what’s best for kids, but also what we’ve committed to as a district, and that’s where we come together as a collective unit of educators to work together and make that happen.”

At some point in the future, Canvas will be an all-encompassing entity that houses everything from digital textbooks to Zoom links, but for the time being, the district is just brushing the surface with its capabilities.

“We’re only using the tip of the iceberg right now,” Daniel said. “That’s intentional because we don’t want to overwhelm. The way that Canvas is designed, and the way that we can be building in so many various components, teachers aren’t going to ten different websites to grab information students have submitted and pull it back to one spot. [That] saves time which means they get to spend it back with [students] and with their own families.”

While there haven’t been “many reviews yet just because it’s still very new,” Passinault thinks that the switch to Canvas will be a positive experience for the students, teachers, and families in the district for the foreseeable future.

“It’s an investment the district has made, and it’s a commitment they have made to continue with Canvas [for years to come],” Passinault said. “It’s not just a ‘let’s try it out and see what happens;’ it’s something that the district is committed to and invested in.”