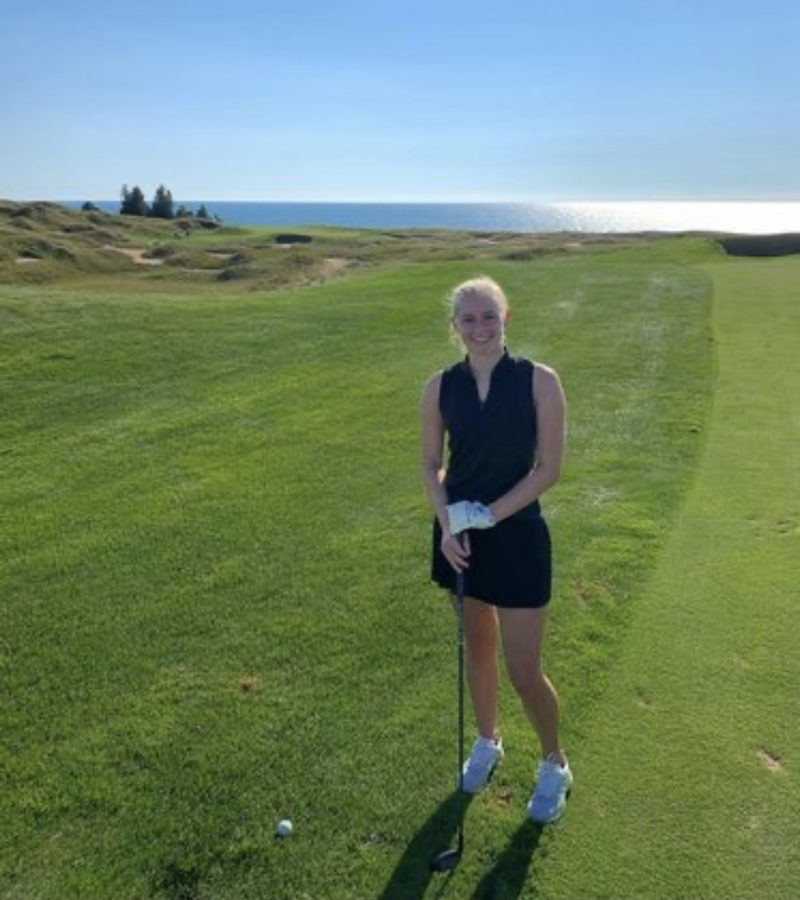 Given COVID, and having to have such an abnormal season, how do you think your team did as a whole when faced with so many uncertainties?

“I really think our team did a great job as a whole. We practiced really hard and really consistently throughout the season, and we were able to follow all the COVID guidelines. We ended up making it far this year, all the way into regionals, and we were only off by a few strokes. Overall, we just did a really great job as a team, and I am very proud of us.”

Did you guys have any individuals that really stood out this season? What set them apart?

“I think we had a lot of great individual performances this season, but one in particular, Skylar Teirney, did an outstanding job this season. She really helped out the team, especially when she was shooting in the ’80s and 90’s a few times. Not to mention she was a freshman which makes her scores even more impressive, and I am just very excited to see what she accomplishes in the next four years.”

Since you were a senior this year, and it was your last season of golf, how do you personally think you played this season?

“I actually do think I played well this season. I placed in some events and was able to get a few medals, and I am very proud of that. It was a great way to end my career in golf.”

You said that you ended your career. Does that mean you aren’t going to play in college? Was that upsetting to think about?

“Yea I am not going to play in college. It definitely is sad to think about, especially since our season wasn’t normal, so my final season of golf didn’t include some of my favorite events we get to do. There is always this huge tournament at the beginning of the season in Traverse City and we didn’t get a chance to do that, and that is always one of the best parts of the season. I am pretty disappointed about that, but the season was still a lot of fun.”

On that note, do you know where you want to go to college?

“Yes, I do! I just got accepted into Michigan State University, so I am going to be going there, and I am super excited about it.”

Getting back to this past season, what were some of your greatest memories from this season?

“One of my favorite memories from this season was when we were able to go out for a team dinner after our event in Muskegon which was our regional tournament. It was a great way to end my last season. Since we weren’t able to have regular team dinners throughout the season like normal, this was just a really nice thing to be able to do.”

Looking back, who was some of your biggest competition?

“Forest Hills Northern has a really good golf team, and they always have been a tough matchup. They were probably our biggest competitors throughout the season.”

Is there anything you want to say to the underclassmen, and the kids that will be filling in on the team in the future?

“The advice I would give to all of the younger and upcoming girls is to practice as much as you possibly can, and practice hard. The more practice the better you will get, obviously, but it will also make the sport more enjoyable as well.”