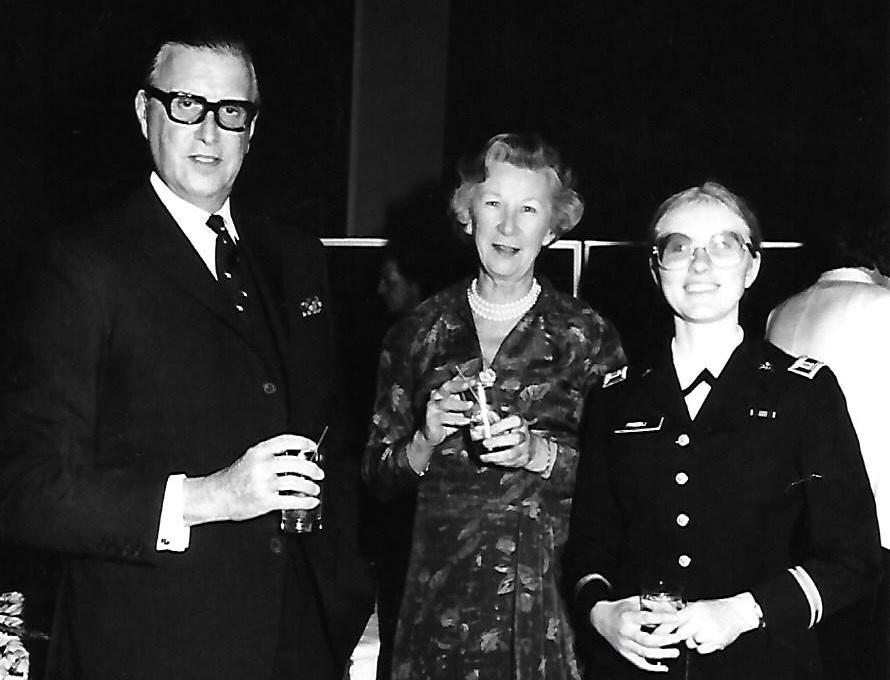 Debbie Friedli pictured on the left, along with Prinz Casimir zu Sayn von Wittgenstein (the prince of Germany) and the princess of Germany in January 1980.

High School: Various, due to moving

“I went into the army in 1975, after college. I went to the University of Maryland in Munich, Germany for two years after high school and then transferred to University of Maryland, College Park, and upon graduation, I wanted to go into the military because my family is from a military background and I wanted to follow suit. So at that time, I went to the Washington D.C. District Recruiting Command. I was commissioned as a second lieutenant in October of 1975, and then I went on active duty in November of 1975—where I was sent to Fort McClellan, Alabama for three months of basic training to learn to become a soldier—and also then as an officer in the United States Army. Women, we weren’t allowed to be in the military academies at that point or in ROTC on college campuses. I went through what they called a direct commission program, and I had to apply to go into the army. We had to do a physical and then go before a board of officers who asked us various questions and other things, and then I was approved. Once I was in, after 90 days in McClellan, Alabama, I went to Fort Huachuca, Arizona where [there] was military intelligence school. I spent about four months there, and then I had my first duty assignment in Aberdeen Proving Ground, Maryland. That’s where I met my husband. We got married, and then we had a three year assignment in Frankfurt, Germany, so I spent a total of five years [in the military]. At the end of my tour in Germany, it’s hard when you’re both in the military trying to be stationed together, and we were bound for different advance courses; he would be in Huntsville, Alabama, and I would be going to follow up military intelligence advancement training in Fort Huachuca, Arizona. So I decided to resign my officers commission so we could then have a family because we wanted to have a family. So that was the extent of my career, but it was an interesting one. I enjoyed it.”

How were you a lieutenant before a soldier?

“I was commissioned one month prior, and then I had to wait for the next available basic training course, and that was going to be in November, so I was the second lieutenant because that was the direct commission program. Then they sent me [to basic training]. I had never, of course, handled a weapon before, so I learned to fire the M-16 rifle and a few other weapons. [I] also learned about marching and, of course, other things about being a soldier. And the interesting thing, too, is that back then, [I] was [in] the Women’s Army Corps, also known as the WAC, and so we had a special insignia that we wore on our collars. I wore that during the 90 days that I was at Fort McClellan in Alabama, and we had an all female cadre that trained us. During that time, if they knew that you were going to succeed and pass basic training, then we were allowed to select a branch that the men also got to do. My first choice I requested [was the] Military Intelligence [Corps], and I was able to get that in my training, so that was when I could take the Pallas of Athena off the insignia—the Women’s Army Corps insignia—and then wear the Military Intelligence [Corps] insignia.”

“[The positive thing] was being able to help other soldiers who served under me [and] learning about what it was like to serve your country, especially when we were in Germany. At that time, it was the Cold War period, and being in military intelligence, our job was to learn all we could about the Soviet Union. Just having the opportunity to be able to serve and to be there for the soldiers and to help them—because one of the jobs I had was to be the personnel of a battalion there in Frankfurt Germany, so my duty was to help the soldiers with any types of personnel issues that they needed help with—that was very gratifying.”

What advice would you give for people looking into serving?

“I would just say to examine your heart. If you’d like to serve your country, it is a noble thing to do. It is a very challenging job, but it is also very satisfying. Just learn about what you like to do. It’s challenging, but it’s also something that gives you the opportunity to grow and to learn about yourself and working with others.”

“I think it’s a good thing that we, every year, think about those who have served our country, those who have gone before us, and what they did throughout our history of our country. Also for people to get together and understand what those folks did, the sacrifices that some of them made—it’s important to understand and know that.”

How did growing up in a military household affect you?

“I’ve always respected those that served and looked up to them and understood they had a job to do. I know that my father was serving while the Vietnam War was going on, which wasn’t a popular war back then back home, but he was doing an important job taking care of injured soldiers. So I had the opportunity to understand what that meant [for] people who fought in the Vietnam War and [to] just know that no matter where we served around the world, [taking care of people] was important.”

How has the military changed in regards to women?

“Women were [just then] coming into the military branches; today it’s a little more common, but back then, [for] some of the men it was a little harder for them to try to go ahead and learn how to work with women, but eventually they did it. So sometimes I had to work a little harder than you’d expect so they would take me seriously, but I was able to thrive and earn the respect, so that was important.”