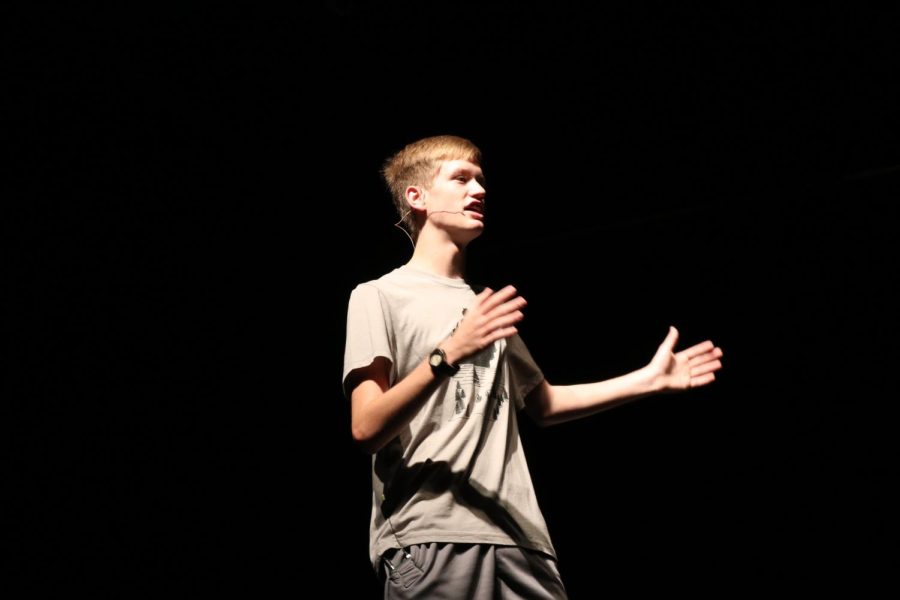 “I decided to try out for two main reasons. One, I’ve had past experience doing theatre all four years of high school and two, a bunch of my friends are doing it.”

“At this stage right now, we’re [doing] run-throughs, but we haven’t been in full costume or had all the sets to do all the transitions and things. So, I think what I’m most looking forward to is for all the pieces to kind of come together and for it to just be super awesome. I’m just waiting for it to have that little magic moment of, ‘this is how this is gonna look,’ because it’s kind of bits and pieces right now.”

“I mean, it’s Cinderella. You can bring your kids or you can just go by yourself. You can see the show cause it’s got a good story. We’re all still going through pretty hard times, so I think having a show to get your mind off that is good.”

“There’s a horse in the show named Buttercup that is made out of paper mache. [Senior] Logan [Verlinde], the lead who plays Prince Topher, he has to jump up on top of it. And the first time he jumped on top of it, it was only one layer thick, and he cracked the entire back of it. Because it’s paper mache, it’s really brittle. Then, he just looks down and he’s like, ‘dude, did I do that?’ It was so funny. It was just one of those things where it just happens and then you just laugh about it.”

“My character is Lord Pinkelton. He’s very regimented, and I like to think of myself as somewhat regimented, or at least I hope I am.”

“I drink a lot of water, and then I walk around backstage a lot. That is it.”

“I’d say it’s most likely just being able to come up with something that I’m trying to come up with like ways that you can make people smile, and you make people laugh. I think that being a person in the theatre, I’ve learned how to communicate with people better and how to interact with people better. Not only just on stage as a character, but in real life too. It’s kind of weird.”

“I can’t really give you an answer. I think it’s because Disney characters are super fantasized and really radical in how they are. Like, if you’re a protagonist, you’re a really big protagonist. If you’re an antagonist, you’re a huge antagonist. I don’t think that’s how people are, but if I had to choose one, I would be a Scar from The Lion King. He’s bad*ss. Make sure that gets in there.”

“I would like to thank everyone who has pushed me this far to try new things, that includes my family and close friends.”