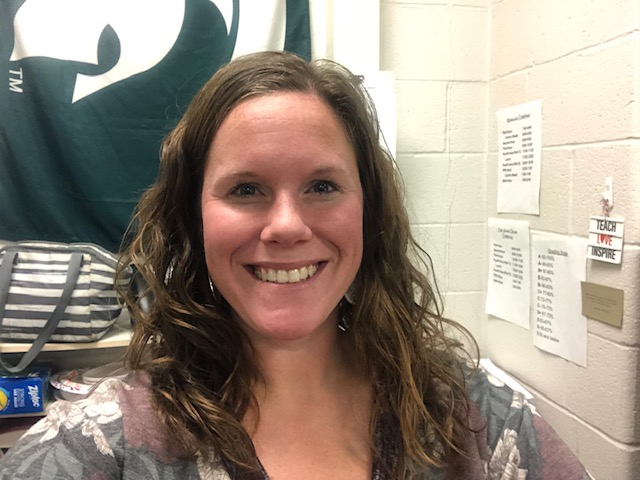 “If you look at the course of history—what women were allowed to do hundreds of years ago—it is insane how little they were able to do and what little rights they had. Even just thinking about in the home and raising children and then to voting and what kind of jobs they were allowed to have—it’s really incredible. I’m so thankful for their legacy that they left.

I think it’s really important to instill that there’s still work to be done of course, but also maintaining what we have and realizing how awesome women are. The fact that we have such camaraderie with each other—I think that’s what’s so special about it. I have a lot of great, strong women friends, [and] I love to be with them because we can talk and chat and help each other through life’s events, and you don’t quite know [that] unless you’re a woman.”

“I would say the biggest one [is] being a mom to my kids. I’ve always wanted to be a mom, and I’ve always wanted to be a teacher, so I would say that’s also something that I take a lot of pride in. Both of those roles I view as equally important. I’m really thankful that I’ve gotten to have the opportunity to be both. I always have had that in my head that that’s what I wanted to do, which is nice, and the fact that I achieved it—I’m proud of myself for being able to do that, even though that doesn’t seem like a lot. That, to me, is what I’ve always wanted, so I’m excited that I was able to have that opportunity.”

3. What women do you look up to for inspiration?

“I don’t have any famous women, specifically, but I would honestly say my two grandmas. My two grandmas are my best friends in the world, and they have taught me a lot about faith, and they’ve taught a lot about marriage. It’s interesting because my grandmas obviously are older, so they lived in a time period where [they had] much more of a traditional role as a woman. But I love that they’ve lived a long time, and they have such good advice about life and they don’t stick to just that traditional role, even though that’s what they did when they were my age. I’m a working mom, and they weren’t, but they totally appreciate that and encourage me and push me to be the best I can be in that role, and I think that’s really cool. A lot of women that age don’t necessarily share those same things. So my grandmas have really inspired me to be the best person that I can be, and I just love talking to them. They really have shaped me and [my view of] how women should be. They are a testament to that.”

4. How do you strive to be a mentor to other women?

“I have two daughters, so I always look at that as being a challenge. I would say that I tend to be a pretty strong woman in a lot of ways, and I want my daughters to be like that because I want them to be able to be whoever they want to be and not ever feel like they’re not enough, but also cherish being a woman. I think there’s a balance between that and not just being like, ‘I can do whatever I want’ [without holding] on to the awesomeness of being woman. I look at that as a challenge in pushing them to stand up for what they think, so I think that’s my biggest role.

But I also obviously want to push my female students to do the same. The longer I teach, the more I’m like, ‘Okay, we [have to] look at some of these stronger women in literature and make sure we’re talking about the female roles in books and how it’s changed, even when you’re reading [The Great] Gatsby versus [when] you’re reading something from modern lit and how that’s changed so much. I’m hoping that I could inspire students to start to think about that, even the male students to think about that.”

5. What obstacles have you had to face as a woman?

“I don’t have any specific ones that I would say. [Growing up], my parents were totally like, ‘You can be whoever you want to be,’ and I feel like I’ve had a pretty easy life in terms of achieving what I want to do. But I do think [that], sometimes, classroom management is hard as a woman. Sometimes you run into some students that don’t respect you for that, and that gets a little tough. I’ve had a couple classes that just get a little bit hard, and I [think] that, maybe, with their male teachers, they didn’t treat them that way.”

6. As a member of a group that has been historically discriminated against, how do you stand in solidarity with communities who have also faced systemic discrimination?

“I think what I try [to do], and [what] I’ve been trying to do the longer [I teach], is, within the English classroom, get a variety of literature for kids to look at so it’s not just the white male authors. I’m doing Long Way Down this year, which is written by a Black male, [and I’m] trying to pull in poetry and things like that. The longer I teach, the more I’m trying to change some of that. I want to do a book club next year [with] books about people that are different than us. So on my list [for] next year, I really want to do a [book] about a girl that is in foster care, [or] a girl that is deaf and her experience in the Deaf community, [or] a person who has [a chronic illness]. So [I’m] trying to get a variety of experiences to let kids really experience people that are different than them, not necessarily just racially different but also [in] life experiences, and I think that makes us appreciate what we have. So I think I try to stand with all those groups by just spreading light on some of those problems. Reading about people that are different than you can help change you, I think.”