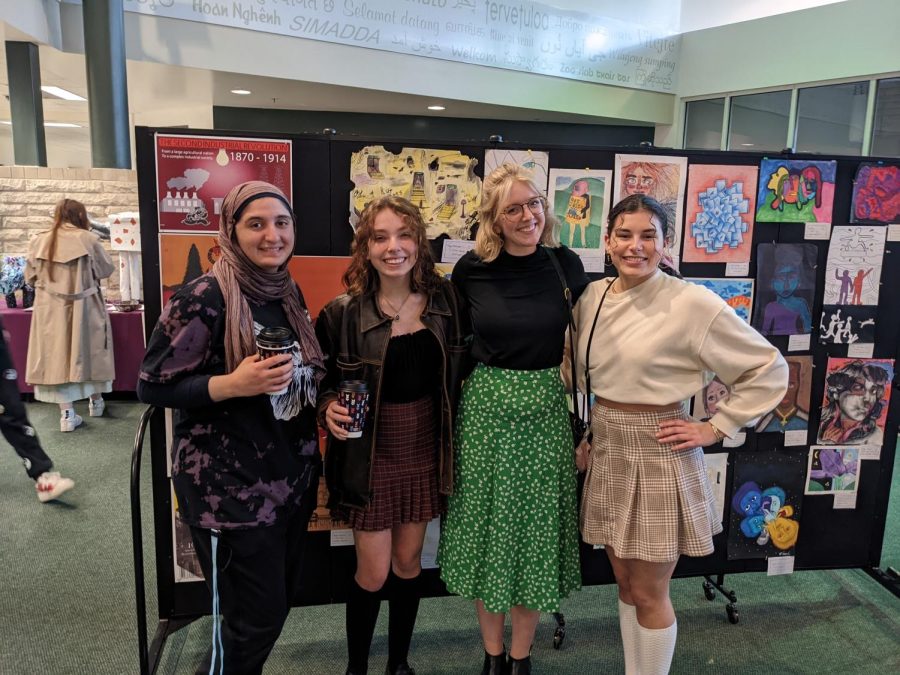 “Every day, I have rights because of the women who fought for my rights. So I think about it a lot. I was thinking about it today; I’m listening to a book that takes place in the 1800s, and these women have to get married to men in order to have things of their own, in order to be safe and have a roof over their head, and [I’ve been] feeling so sad for them and so glad that I don’t have to do those things.

On a more personal level, [I’m grateful for] the women who I’ve directly interacted with in my life who have given me the tools to advocate for myself and to have the presence of mind to understand the past in order to move forward as a woman—like my mom and grandmother who kind of set that path in motion.”

“I didn’t expect to be where I am now. When I was young, I didn’t know what I wanted to be or who I wanted to be. I think one of my greatest achievements is not really something tangible, but it’s in the fact that, out of being a young person, I’ve grown up into a person who I am proud of. I’m confident, and I’m poised, and I’m these things that I value in women who I’ve seen in the past. [My greatest achievement is] that I’ve been able to say, ‘As I’m growing, I’m becoming who I want to be.'”

“I have been very lucky to be able to travel a lot. Not in the last two and a half years, but I was an exchange student in high school. That was an amazing experience. I was able to travel on my own, when I was 20, around the whole United States for like four months—which is a big deal. So I think that feels very good, and those are some of the opportunities that women in the past wouldn’t have been able to do. Traveling on your own as a young woman is definitely something that has become easier as women have gotten more rights throughout history.”

“I look up to my mom. She was a nurse midwife, before she retired, and then a school nurse, and I think [she’s] an amazing woman who worked really hard for everything that she got. My grandma was a secretary in the 1960s, and every time I watch Mad Men, I’m like, ‘That was her life. Look at you go.’ But [she was] another woman who always knew what she wanted, and she was really good at going and finding ways to get that.

And then [in terms of] female artists who I really respect and am drawn to, [there’s] Cindy Sherman, who’s a photographer who really pushed the boundaries of art making and how we perceive women in art. She’s a notoriously beautiful woman who makes herself ugly and photographs herself in that way. [Judy Chicago] did this piece called The Dinner [Party] that takes all of these female artists throughout history—art specifically has not represented women; it’s been a very male-dominated field—and so she took all of these women through history and put them at a table together, like, ‘If only they could eat and discuss throughout history.’ Artemisia Gentileschi is another artist—she was making art in the 1500s, when it was so male-dominated, and doing amazing things.”

“[By] shedding light on the fact that women have to stick together and lift each other up. Anything we do, any slut shaming or other sorts of shame that tend to pit women against women—[I’m passionate about] really breaking that down and [asking], ‘Why are we doing that? And how can we stop doing that?’ Because it’s a tough world out there, and we have to stick together. Especially in high school—I know it’s tough out there. I was in high school not that long ago. [I strive to be a mentor to other women by] doing anything we can to bring those things to the table so that they’re not forgotten-about conversations. I feel like so much of our changes happen when we change the way we talk every day—using languages of respect and, when I talk about art, bringing in female artists so it’s not continuing this idea [that] this field is male-dominated.”

“There have been a lot. I think it’s interesting because teaching is one of the careers that tends to be more female-dominated, so there are less career barriers—although more men become administrators than women. But, I mean, it’s hard to be a woman in college. There’s sexism everywhere you go and little microaggressions all the time that you just have to deal with—and the expectation that you’re ‘the cool girl’ or that you are going to be fine with it. So I think a lot of growing up is learning that you don’t have to follow those rules that other people set up for you, and I think that’s the biggest barrier.”

“Intersectionality is important. Especially [as] a white woman, [I try to stand with marginalized communities by] standing up for people of color, especially in the last couple of years; acknowledging my own role within racism and my own prejudices; doing my own internal work and understanding my role within that; not speaking for anyone else, but just being there as a support and listening. I feel like that’s been a huge thing for me. It’s important to listen. It’s important to be a part of the conversation, but right now, for white women, we listen.”