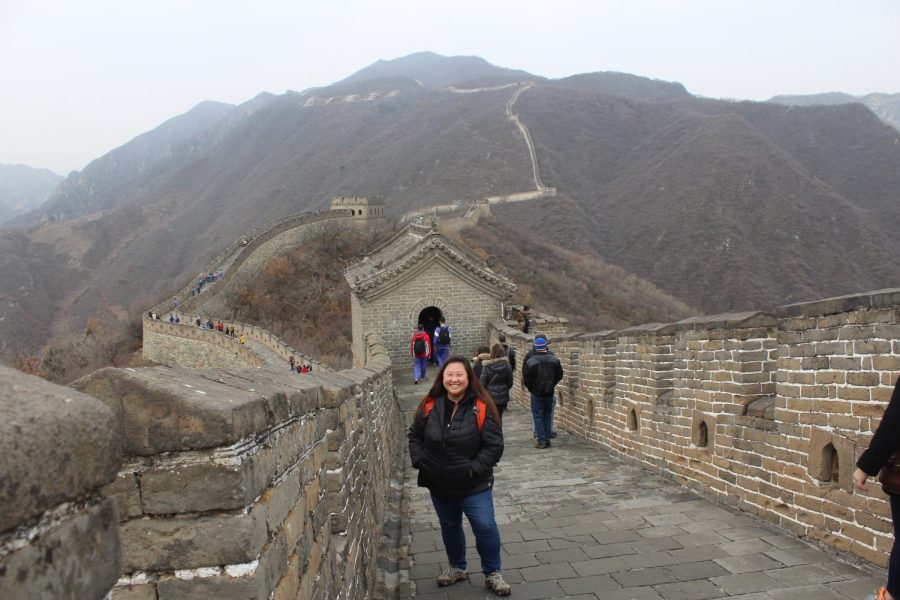 “I’m probably not as thankful as I probably should be [when I] realize some of the things that have been normal that I’ve been able to do and to celebrate. It’s always been very normal for me to be able to vote, and [I think I take] that for granted when it wasn’t that long ago [when] somebody that checks the boxes that I check wasn’t able to vote. So I think it’s important to recognize that it hasn’t been easy, even though there are some things that are easy for me because of all the struggles that have gone [on] ahead of my time.

So it’s important to remember that and to remember that sometimes there’s a misconception that everything’s great now for women and we’re on equal playing fields, when the reality is that we’re not in a lot of spaces, even in this profession that I’m in now. So it’s important to remember that there’s still a lot of work to be done and that there’s people from all backgrounds that are supporting women’s [right] to have more equity and voice in a lot of decisions. Who’s in the room that [is] getting to make decisions and are those decisions then equitable based on who [is] making them? Sometimes the answer is no, and sometimes the answer is yes.”

“I mean, getting a master’s degree in a very short amount of time while working full-time and being a teacher—that’s a pretty big thing to do, and it feels like that flew by very quickly. But I think, professionally, some of my greatest achievements are building some really good working relationships with my colleagues and having to actually realize that you can’t do it all and that you need a support system. And [I’ve learned] to build that team around [me] with [the mentality that] ‘this is my skillset [and] I need to make sure that there’s somebody on my team that can do X, Y, and Z because that’s not something that I’m very good at.’ A lot of times, there’s all this pressure on women that you have to do it all and be exceptional at it, and to realize that you don’t have to is a great achievement in itself, and to be able to seek support when you need it is important too. But sometimes those are hard things to do; still there’s that perception that you [have to] do it all, you [have to] be the best, you [have to] not complain about anything—because your voice in the room can be perceived one way versus if that was a male counterpart, [it] could be perceived a very different way.”

“It’s always fun to go to different conferences and to learn with your peers and to get excited and be invigorated about teaching. It’s a tough job, but I still love to do it every day. I think my experiences that are most exciting are when my students are having those successes; that’s the excitement for me—we get to share in that with you, and sometimes students don’t realize how excited we are for some of those accomplishments. To see students struggle and fail and then get to the other side of that—that’s exciting.”

“I definitely have a really tight circle of girlfriends [who] have been super supportive. We’re from all different industries; some of us have kids; some of us don’t, and definitely having that support system [has been inspiring]. I definitely look up to all of them. And then, with this job, [I look up to] all these other teachers that balance a lot of things. I don’t have my own kids, so they’re doing double duty, [and] to see that struggle, it’s like, ‘I can do this if they’re doing X, Y, and Z at home.’ I’m like, ‘All right, cool—don’t have to wake up at 3:00 in the morning to feed a baby.’ And then [there are] support systems and people that I look up to [that include] men and women. I’m very lucky to be teaching a couple [of] classes with Mr. Colegrove—I’ve learned a lot from him. [I’m] teaching with Mrs. Richardson, kind of partnering with AP Bio, and [I’m] learning a ton of stuff from Mr. Spadafore, who’s a little bit younger than us. [I’m] making sure that I’ve got a good team around, so it’s been good.”

“I don’t know if I’m doing it intentionally, but I think that being honest and true to yourself is super important—and to just recognize that it’s not easy for everybody and that everybody comes with their own struggles and things that they carry around with it. To have that empathetic lens is important. [I] try to do the best that I can and be the best example and version of myself, and then, hopefully, that’s enough for somebody else.”

“There have been situations where I have to be careful about my tone in the room because being a confident, strong woman in a room of mostly males or all men can be perceived one way. [One of the obstacles of being a woman is] making sure that you aren’t perceived as being [a certain way]; there’s just this fine line to kind of do that in those spaces. So I’ve had to navigate that a little bit and read the room before [I] tackle something. But I’ve been very lucky that there haven’t been too many situations [like that]. There’s been situations [where] something has been said that’s a little offensive or maybe something that somebody thought in their head but shouldn’t [have said] out loud, and it’s about trying to watch how I react to those things and making sure [that] I’m always aware of my behavior when I’m in some of those mixed spaces, which is hard. And sometimes, [I’m] like, ‘Well, I shouldn’t have to.'”

“It’s important that we support one another. For whatever reason, I feel like there’s sometimes this misconception that there have to be individuals that have more than and some individuals that have less than. But the reality is [that] if we’re all functioning well and doing great and have equitable access to a lot of things, then the society or the group as a whole actually does better. So I think it’s just about really trying to remember that and remember that while I’m lucky to have had some things—whether it’s voting rights or being able to be in a certain space where others can’t be—not everybody [has those things]. [It’s important] to be reminded of that and to not take those things for granted and to be able to support people that don’t have those voices and can’t live in those spaces. It’s okay to be vocal about those kinds of things, [to say], ‘This is not okay. This is not right.’ And [it’s important] to be willing to fight for everybody because, at the end of the day, we all win.”