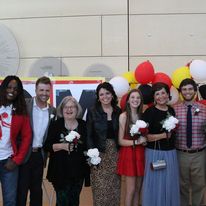 “I am grateful for all of the women who have fought for us to be able to have equity in our pay, equity in the ability to move forward in our positions and our work, the right to vote, all those things that women—Susan B. Anthony—everybody from the past [fought for], including women in my family. My cousin was in the CIA under President Clinton. She has since deceased. She had three attempts on her life because of the knowledge that she had. I’m grateful for women that gave up their life and plowed the way to progress all kinds of wonderful things for us today.

I’m not doing anything as fantastic and world-renowned, but every day [I’m] trying to make people aware. [I’m] trying to make kids aware [that] every action has a reaction, and [I’m trying] to make sure that they understand that there’s two sides to everything and explore both sides so that maybe we can all meet in the middle with ideas and move forward in confidence and [have] the ability to make the world a better place. So I hope that [the] small steps that I try to encourage in my career [make an impact.] Also, [I want to be a good example of] work ethic—working hard and being someone that my colleagues and my boss and my students can count on. And then as a mom, I know I’ve perpetuated another generation with my own children, and then with my grandchildren, of watching what I say and watching what we do and being aware of speaking not my truth, but the truth.”

“My children—because at the end of the day, when I’m gone, there might be a few students who remember a show they were in or working alongside me as a student director or something, but, really, I’ve poured my life into my kids. That’s even been my hobby outside of school and the theatre, and they will be my husband’s and my legacy, and they will wear it ten times better than what we have.”

“I’ve done a lot of travel. I’ve done some travel with students. We did a big trip to England; we did Germany, Switzerland, and Austria; we did a big trip to Italy. I worked in an orphanage in the capital city of Albania, called Tirana, and I did that for a couple summers for three weeks, just trying to make sure that the kids were loved. We did a lot of cleaning and rebuilding things.

Everyone thinks [my most exciting experiences] would be stuff in the theatre. I think some of that is seeing kids come together for a common purpose. It’s never about what happens on the stage. It’s watching the kids working hard and going from words on a paper to little kids and high schoolers walking into a show and taking those words you’ve brought to life; you do that with a team of people ten times more talented than me that just made me look good.”

“Elisabeth Elliot is my Christian role model. Her husband and four other guys went, in the mid ’50s, to [Ecuador], and they were bringing food and coming into a tribe that was very renowned for killing anyone who came into the land. They befriended the Aucas, and they were with them for, I think, a little less than a month, and then all five guys were killed. Elisabeth, whose husband headed up the mission, came back and wanted to meet all of the tribe that had killed her husband and ended up forming great relationships with them.

Condoleezza Rice is my activist role model. She runs the Hoover Institute at Stanford, which is a think tank, and she also was [the] first Black secretary of state, and I just really admire her. There are so many women—there’s women in the school; there’s students in this school that I admire. But those are two influences that come to mind, especially.”

“I hope that I’m approachable and kind, and I want to be the person that someone can talk to and they feel like, ‘I can say anything to her, and it will be kept in confidence, and she’s not going to tell me what to do, but she’s going to help me find my own way.'”

“I hate to say it, but everything I’ve wanted to do, I’ve done, and I credit the women who came before me. I feel like I have equal pay here; I feel like I’m heard—in the theatre world, [it’s] same thing. There really hasn’t been anything where I feel like I’ve hit a wall and couldn’t progress because of my gender. My brothers, when I was little, [would sometimes say], ‘You can’t do that ’cause you’re a girl,’ and then I’d go out and prove them wrong. But, again, I have to give credit to everyone who’s come before and paved that way for me.”

“I think it’s all about us understanding our past, but at some point, we have to say, ‘That’s our past, and people worked really hard so that could be in the past.’ Now, we have to take our future and move forward and show young women that we’re not going to live as victims; we’re going to be victors. And instead of thinking about every wrong that [has] been done, I am a person who’s very forward thinking. [I’m passionate about] taking where I am today and moving forward with that in gratitude of what happened and what people have paved for us—but also going, ‘This is what I can do to make things better.’ Women—we’re hard on each other. I think, as women, we need to support each other. It doesn’t matter what your decision is. Just say, ‘You know what? I might not agree with that, but I support your right to make that decision, and I support your right to do and think, and you support my right, and we love each other and encourage each other to do that and make the world a better place.'”