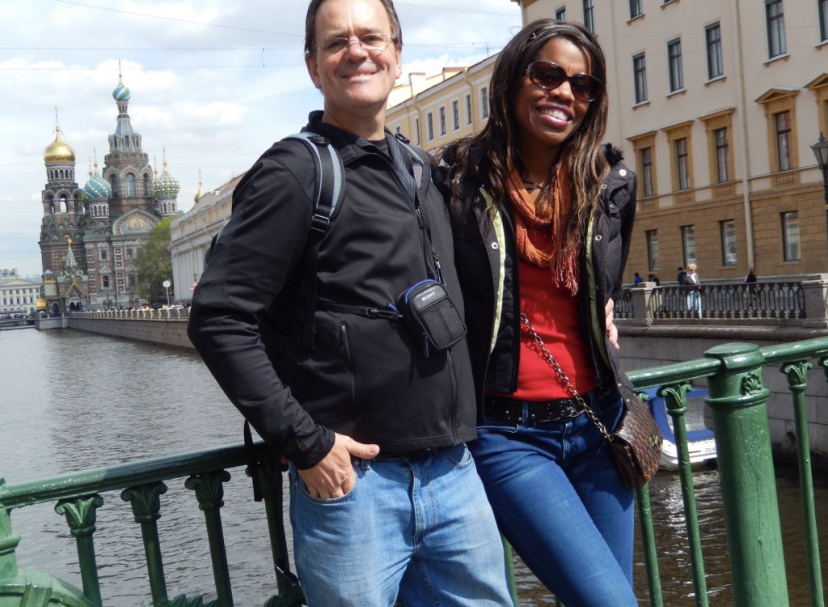 Jelier and her husband in Moscow

“We definitely take a lot of things for granted that previously weren’t available to women. One of the books that we check out in the back room is called The Help. The Help is a book about women and how they were sort of locked in a place, and the interesting thing about that book is that the women that were the servants—the Black women who [were the maids]—and the women that they worked for were sort of all locked in a bad place; they were kind of trapped in their lives. The women that worked for them and the women that were the employers were trapped in this [box]: this is the way that you are a woman—whether you’re a Black woman or you’re a white woman, this is how it has to happen.

So I guess the reason that book was so heartbreaking to me was because I felt all of the women were trapped; none of the women really had choices; none of them could freely live the way they wanted to; and that was really not that long ago. When I think about the way women were categorized and trapped, like they were in The Help, that does a disservice [to] all people—not just women, [for] men, for children—because the women were not able to make choices, and women are 50% of the population. [It’s] so weird that you weren’t able to be fully in command of your own life.

So whenever kids read that book, I always say, ‘You know, this wasn’t that long ago.’ The secret to reading that book is that all the women were trapped in a box they couldn’t really break free of not long ago. I like that they persevered, and they knew that things had to change. Together, the women made a change. They realized, ‘This is so screwed up; this is not right for us to live this way.’ I think about women from the past; regardless of their station, they were sort of trapped [and] had to fit into this box, whether that spoke to them or not, and it wasn’t that long ago that these things were happening.

I hate it when we say [things like], ‘This is the first woman to go to space.’ [That’s half] of the population. Of course a woman should go to space, and of course she’s going to reach back and help another one. I don’t understand how it took so long for these kinds of changes. [I’m grateful] for the women that were trapped—[that] they recognized it and they moved forward together, regardless of [their station]. [There’s a] saying that says, ‘We’re in the same storm, but we may not be in the same situation.’ You may have a life vest, and that’s all [you] have; this person could have a motor boat. But we’re in this storm, and how do we survive it? And I think that speaks to the sisterhood of women.”

“My greatest achievement [is that] I wrote this book. I got an amazing publisher, and I got my Library of Congress number; I was so happy.

I used to be a journalist at The Grand Rapids Press, and I left there to [be at home with my kids]. I thought, ‘It’s too hard to work full time and be a mom of three.’ So when I left there, this publisher approaches me, and she’s like, ‘I want you to write the book I’ve always wanted to read.’ It was this amazing opportunity, and I don’t think I could even write the book now. I was in this mind frame.

The book was about eating in season—starting with maple syrup, going through the year of eating [in] season in Michigan. I don’t know if I would have the mindset to concentrate on [that now]. First, the photographer and I went to all these farms, all these bakeries, any person that was making homegrown food, for a year. Then I spent a year writing it, and I don’t know if I would have the capacity to be so on target [now], but I was so on target. I would drop my daughter off at kindergarten [and] my middle kid off at [preschool]. I had my son; he was a baby; I took him everywhere I went; and then I would just go to town. I would concentrate and write for [hours]. That was my greatest achievement.”

“I think the most exciting experiences I’ve had [were when] I had an opportunity to live in other countries. My husband’s a professor, and professors get sabbaticals [with] the Fulbright [Program]. My husband has had a number of sabbaticals and had an amazing Fulbright; we got to live in Russia in 2014 for his time there, when he taught at Moscow City University. It was really amazing. We [went] there, and I [had] three kids; my kids were four, eight, and ten. We [didn’t] know Russian. It [was] all so different.

There was an organization called [the] American Women’s [Organization] of Moscow, and I joined. Most of the women that were there were the wives of people that were at Microsoft—really big companies—not going on a Fulbright, which is a governmental program. You know how that works: no money. So I go there, to the group, [and] I realize these women have chauffeurs [and] housekeepers, [but] it’s just me and three kids trying to figure it out. We would just go places. When we would get in the subway, we didn’t recognize the words, [so] we would memorize where we had to go, and I would count down five stops to [this place] or six stops to [this one].

There, it’s more of a closed society, so there was none of the diversity that we have here. Pretty much no one had ever seen a person like me, ever, and people would want talk to [me] on the subway and say, ‘I know you’re an American; I know you speak English; I got my medical degree in London; I haven’t spoken English in 15 years; I want to have a conversation with you.’

That was really an amazing experience to be able to live there, take public transportation, shop in their shops, learn how to cook in the metric system because it’s different, [and] learn how to grocery shop when you literally can’t read the writing.”

“I have a lot of amazing women in my family. My grandmother—who’s passed—when she went to school, she lived in Tennessee, and the schools were segregated. Where she lived, she could only go to school until eighth grade because they only had the segregated schools where she lived [up through] eighth grade. So she had to go move in with a family many counties away to go to high school because there was not a high school available [for her]. If she wanted to go to college, she had to be super smart, and she had to get a scholarship, and she did. So it was kind of amazing that she was able to [do that] because we kind of take all of that for granted.

So I have some amazing women in my family. My sister has done a lot of genealogy in my family, and I even have a matriarch in our family from way back that was one of the first Black Gold Star families in the nation. Her son was in a troop of African-American soldiers and died in World War 1, and when they established the Gold Star families, they weren’t necessarily going to include a Black woman. She was like, ‘Nope, I’m going; I’m going to be there; the plane’s not leaving without me.’ And she made sure of that. So we have a lot of family stories—amazing stories about amazing women—so I always felt like I [had] to do right by them.”

“I guess [by] leading by example, [just being] a good person. My husband has a saying, and his saying is, ‘I always favor on the side of opportunity.’ I love that phrase because how can we make this an opportunity—for our students here, for my children, [for] your friends, for women that I know. What is our opportunity? Because everything can be an opportunity. So that’s, I think, how I see life and how I strive to see life.”

“I have a journalism degree from the University of Kentucky, and I did an internship at a newspaper called the Lexington Herald-Leader. There were four of us. There were three guys [and me], and we all had to take different turns working in different places in the newsroom. The boys got to spend two weeks working in Eastern Kentucky, which was a very remote coal mining area, and they told me, ‘No, the boys are going to spend two weeks [here]; we’ll have you do something else.’ I was like, ‘No, no, I’m going to definitely go; I don’t know what’s going to happen, but I’m definitely going to go there, and I’m going to live in the little apartment thing they have, and I’m going to go find the stories.’ I remember making a big point of, ‘I’m definitely going to do that.’ And I did do that. I was not going to be sidelined. I remember thinking to myself that I [had] to really stand up for myself in this newsroom or I [wouldn’t] be doing the action stories, which is what I wanted to do. I definitely thought that I wouldn’t be a fully-fledged intern if I didn’t go.”

“Everyone that is here in the US, with the exception of one group, came from somewhere else. Whether you wanted to come or not, you came; you got here. So all of us are pursuing the same things—the pursuit of life, liberty, and happiness. If one person in that [group] of people pursuing this is not accepted, what’s to stop everyone from not being accepted? So I think that we [need to] recognize that we’re all humans striving for the same joy. Advancements in liberty [are] not [like] a piece of pie, [where] you cut it in eight slices, and you get a slice, and you get a slice. There’s enough for all of us. So I think that’s important. I try to strive to be part of that. I’ve done the GLI training and all of the things that we do to present opportunities for all of our students. We present a lot of amazing opportunities here at Forest Hills. Whatever you need to strive for your educational advancement is within our power.”