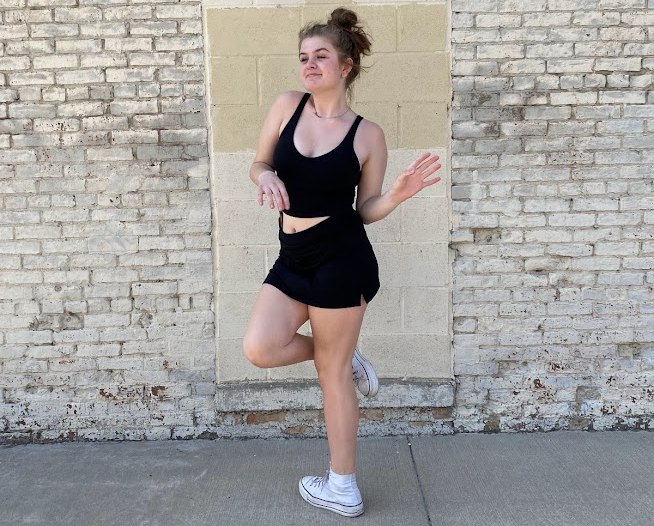 Norah Vanderweide showing how confident she feels in her own clothes

The FHPS dress code puts out a negative message, especially to females

Sophomore Norah Vanderweide was sitting in her French class when she was called out into the hallway. She had no idea what she had done wrong, but she was about to find out.

“It turns out that [a teacher] had emailed the vice principal saying, ‘Hey, this girl’s shorts are really short. I need you to come down here,’” Norah said. “So, [the vice principal] pulled me into the hallway and she goes, ‘Hi, Norah, I heard you were feeling uncomfortable in your clothes.’ I said ‘no’, because I wasn’t. She said, ‘well, she emailed me, so I’m going to need you to come down to the office with me’ and I said, ‘why’?  I was just asking why, because I didn’t see what I did, and she said, ‘because you’re violating dress code’, and I said, ‘By wearing shorts’? She’s like, ‘yes’.”

Norah was dress coded for wearing a pair of shorts that reached just above her mid thigh. She hadn’t done anything wrong, and there was no indecent exposure, so she wasn’t quite sure why she had gotten in trouble for wearing the clothes she felt comfortable in.

“I was mad,” Norah said. “I felt very aggravated and very upset that somebody was looking at my body, and then telling someone else that they saw [something else].”

Norah was upset that somebody had looked at her body and decided what she was wearing was inappropriate, despite it not showing anything inappropriate. She wanted to feel comfortable in her own school but knowing somebody made the decision to judge her clothing was wrong and made her not very comfortable.

‘So, I think that it’s not fair, because the only people who are distracted are the people looking for a problem.’”

English teacher Jonathan Fisher has noticed the impact that the dress code has had on the female population of FHC this year. He has seen that females feel more worried about the way they dress because they don’t want to bear the repercussions of being dress coded.

“I’m not sure I can speak directly to the impact on everyone’s lives, but I can tell you that it has made a lot of young women more nervous this year,” Fisher said. “They want to be fashionable, but they don’t want to suffer the shame of getting ‘dress coded.’ There have definitely been a lot of anxious discussions in classrooms and hallways.”

Fisher has also noticed how the dress code seems to be more geared towards female bodies, despite the constant reassurance that it is not targeted at anyone.

“I have always had misgivings about dress codes in general,” Fisher said. “They are always said to be ‘applicable to everyone,’ yet they specifically target the female body. I understand that there is a need to have a shared norm for what is socially acceptable and what is not, but I would say that dress codes are something that needs more community discussion and more diverse input. We tend to have policies that were made by previous generations and do very little to account for cultural shifts.”

Fisher has a young daughter that will soon be in high school. He pointed out that, although unlikely to happen, if his daughter ever did get dress coded, he would be concerned. Dress coding girls tell them that what they’re wearing isn’t right, and that doesn’t send a positive message.

“I seriously doubt that will happen to [my daughter], Julia, because she tends to dress in more athletic apparel,” Fisher said. “That said, though, if she did get called out for ‘inappropriately dressing,’ I would be concerned about the message that would send to her about her body. Many women are inundated by messages that create negative body image issues for the majority of their life. I would hate to think that our schools are perpetuating that trauma.”

Fisher knows that if his daughter ever were to be dress coded, it would send negative signals to her about her body and the way she expresses herself. It would not build up her confidence, hearing about the way she dresses is not okay, and her father, Fisher, realizes this.

On the other side of things, FHC’s principal Steve Passinault has said that he thinks it is difficult to determine what’s appropriately dressing for school is. He thinks that with the dress code restrictions we currently have, people are still able to express themselves in an appropriate way.

“I believe it is difficult to balance what is appropriate school attire and the ability for students to express themselves by the way they dress,” Passinault said. “But overall, I support what is in the dress code.”

He thinks that the lines can be a little blurred between what is acceptable and what is not, but he also thinks that even within the dress code limitations, there are so many ways for people to dress.

“There will always be a wide range of opinions on what is acceptable,” Passinault said. “I believe the dress code guidelines are loose enough to give students the ability to express themselves with what they wear.”

Norah, however, doesn’t think that the dress code is fair at all, or applicable to all students. She believes it is more targeted at girls, specifically girls of a larger stature. It isn’t fair to target the dress code at girls, but it’s even less okay to target a specific body type.

Norah remembers how she felt when she got dress-coded, and she remembers not thinking it was fair for the staff to tell her that her clothes were wrong.

“I think that it is targeted toward larger girls in some ways, because the same pair of shorts or the same shirt will look different on different sized bodies,” Norah said. “So, I think that it’s not fair because the only people who are distracted are the people looking for a problem.”

“I don’t want to feel like people are always constantly watching me, or like I’m wearing something wrong,” Norah said. “It’s my body, it’s my choice.”