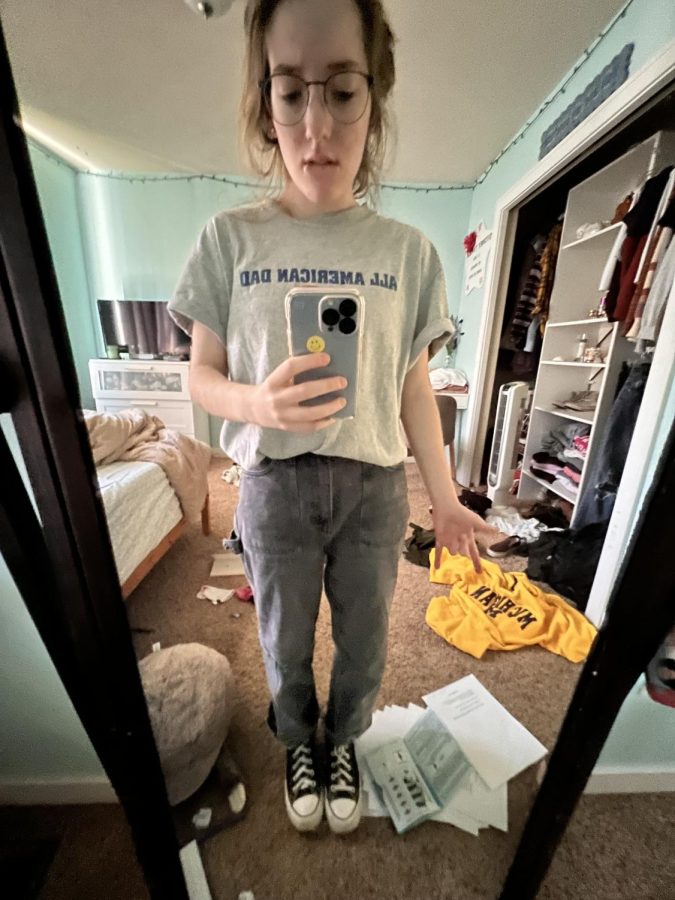 The time in history when I got in my famous car accident (went through a four-way stop after following the rules and got hit going 45 mph). Shoutout Sofia’s All American Dad shirt because I couldn’t raise my arm high enough to change into anything else.

Sorry I’m late, but I hate you

I didn’t get my training wheels off until I was eight years old.

If you, too, had a two-track racing down a hill, you would want to go as fast as possible down it—I lived a slow eight years, having my extra wheels lag behind.

Tortuous for somebody who was surrounded by sidewalks, but I soon memorized all of them near my house, recalling every little crack in the pavement, big rocks that awkwardly stick out, and other city-sidewalk junk and imperfections. I remembered every pretty house and creepy home, every tree that flared variegated colors in the fall, and every large, elder oak.

Hearing about new drivers makes me wish I had a sweet sliver of freedom, sometimes. ”

Unsurprisingly, I was the only one in the world, it felt like, to get their training wheels off late. It made me so mad as a kid.

I joined the sport I loved late too. I got braces later in middle school when they weren’t cool. I saw all the classic movies all too late in life, most of which I still haven’t viewed. I still haven’t decided on any colleges I want to visit, but all I know is that I’m not going right away.

A trend that elucidates my every day.

All the events I get to experience seem to all happen later than everybody else, and it’s this incessant pattern I’m caught up in.

I don’t like to engage in much—introverted and quiet, I keep—but it still makes me mad, just a little, that I watch so many people accomplish so much before me—but here I am. Behind, again.

Maybe I’m too stuck in a cycle. Maybe it has something to do with the fact most people “my age” are older than me. Whatever it is, it’s rooted deeply in how I feel, and oh, how antagonizing and unavoidable that is.

And so are milestones: I am always hearing people announce they got their driver’s licenses.

It can’t be a tough subject for everybody, but it’s a sore one for me given I can’t drive; I don’t want to and seriously couldn’t differentiate the gas and the brake, but it’s still the exciting big moment I’m missing out on.

Hearing about new drivers makes me wish I had a sweet sliver of freedom, sometimes.

At some point, I realize I’m going to have to face my fear of the roads and most importantly, the drivers; I’ll relearn to drive later.

Except I shouldn’t have to be this liability, because it’s reasonable to stay as far as the roads. I like to be the passenger-seat princess, and to give it up so easily might as well mean thrusting me into traffic without any respect at all: it’s safer to keep your training wheels on.

I might be late to get my license, but I shouldn’t feel so inferior.

I am no driver. I hate driving. I’m not tall enough to reach either, but feeling delayed and behind, compared to everybody else, stresses me out. I shouldn’t be so neurotic, inching myself closer to feeling minuscule, but it’s automatically all I’m worried about.

Living my life on a tilt forever has made me inordinately scared for the future, and my lack of driving skills continually sustains my nerves. It makes me mad.

But I can’t end my worrying, but I still, technically, have my training wheels on at sixteen. I haven’t graduated from a bike to a car yet, nor have I accomplished much else since entering high school. After all, I’m used to it all working eventually, even if it takes years.

I’ll still be waiting until I have my chance to celebrate, my chance to seem responsible. When will I catch up?