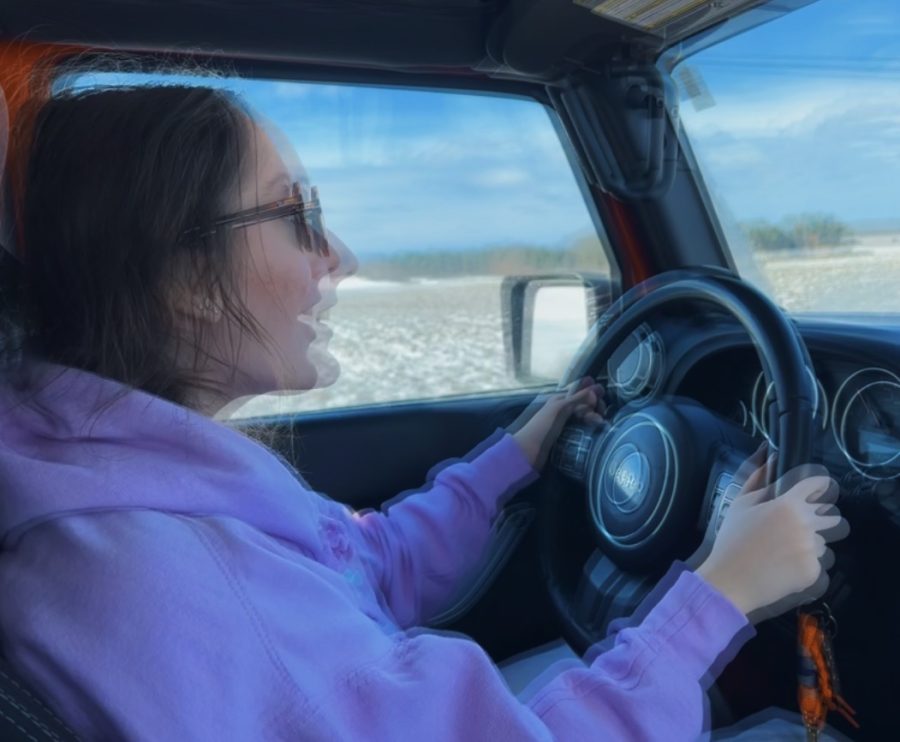 Processed with VSCO with hb2 preset

A 2015 sunset orange Jeep is not a middle-aged man thing, yet my dad adored the obnoxiously-colored brick flying through the air.

And “flying” isn’t the correct adjective to describe it at all: the orange Jeep battled against the wind, and it would sustain a good fight, too.

The good part about owning a Jeep is easier said than done. Proclaiming how rudimentary but utilitarian these vehicles are was the best part, aside from the superior stereo and sheer strength it takes to trudge through any Michigan road.

Because of the nature of Jeeps, it felt like I learned my basic driving skillset on a toaster.

Nonetheless, I wasn’t going fast on roads or abrupt stops any time soon. I made sure to not accidentally swerve, just because the wind was constantly pushing the rectangular being, naturally, away to the side and wouldn’t want to look like one of those drivers. It made it hard to do much wrong.

My mom’s car, a 2021 Lexus Rx 350, feels wonderful: no obscure bumps or creaks like the Jeep made, but a smoother, overall driving experience. Not to mention, it has a rearview camera and all types of luxury car amenities; I believed that I was actually a pretty good driver.

As a default or instinctual answer, teenagers might agree that they’re also a ‘pretty good’ driver.

The teenagers at these ages are also not yet done learning everything, so usually, I hear ‘pretty good,’ styled with an old English accent, or just playing it off, keeping it cool.

It’s true. Instinctually, teenagers might act more spontaneously because they’re on the edge of individualism and self-sufficiency, according to the National Institutes of Health. They’re excited to be getting up and starting new; simultaneously, they’re also finishing high school.

Poor judgment also plays a role in their driving. Problem-solving skills and road experience are something that teenagers lack, and still, to teenagers, they’re still pretty good drivers. It takes time for reflexes to adjust to the new freedom, which is why car crashes are more frequent among the newest drivers.

Who teenagers allow as the passenger in their car goes along with making great judgment calls. Texting and driving isn’t the only form of distracted driving: somebody, most likely a close friend, in the passenger seat can ultimately lead to a crash.

Jamming to music in the car creates immaculate conditions for memory, but not great driving conditions, despite the exhilaration that accompanies no parents and complete control. Aside from being another distraction, most fatal teenage car accidents happen when they cannot handle a situation that driving education can’t teach them like road conditions and low lighting.

Graduated license structures started to be reinforced in 1996 as a way to legally limit teenagers’ exposure to these conditions, and it’s not them to blame. Having confidence in a risky situation is the result of a phenomenon observed across the animal kingdom: the prefrontal cortex, which directly influences self-control, in teen-aged animals isn’t fully developed, leading to compulsory movements and actions—contributing to the high rate of car crashes before the age of 20.

Because too many young teenage drivers put themselves in precarious situations at night, graduated licenses help to make the judgment call for them with the intent of keeping them safe, not away. Once teenagers have a full license, by then, they will have enough exposure to get a grasp of handling poorly-lit areas while nighttime driving.

As soon as teenagers learn once, however, they’re more likely to move on from the experience with knowledge about motor vehicle accidents. It takes one mistake to improve upon any driving misconceptions—it only took me once.

Given the many near-misses I’ve encountered driving an obnoxious Jeep, teenage driving should be taken more seriously for simply who the driver is. Unable to make quick and appropriate responses in unprecedented situations, the safe route here requires a little more thinking when considering teenagers, almost near adults, are exponentially more susceptible to automobile accidents and crashes than people a few years older than them.