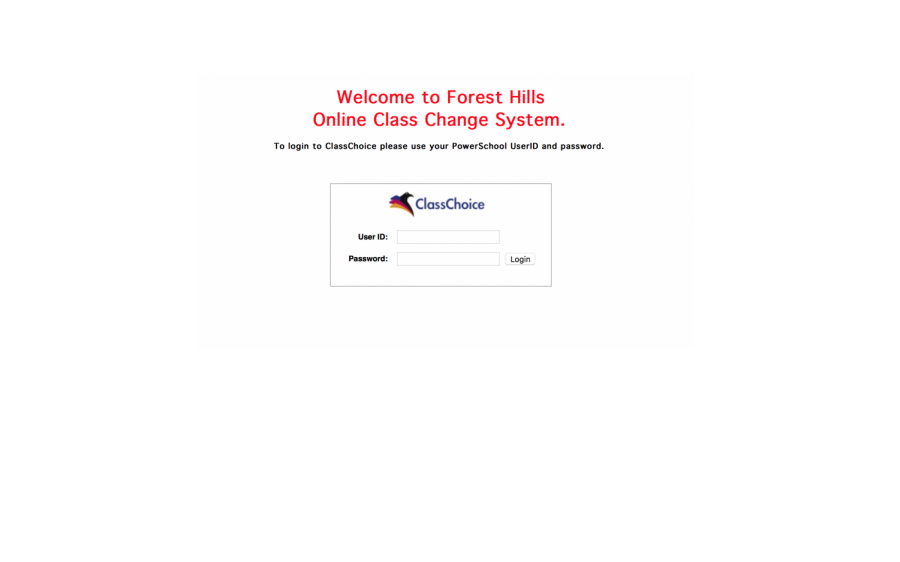 The new semester looms on the horizon. The halls become filled with a rainstorm of fingertips atop keyboards, each cloud with a new schedule brewing in mind.

Every student is poised to leap the moment Class Choice opens, ready to pounce on whatever open spot they can scavenge.

However, that will not be the case this year.

“We’re doing something different this year,” counselor Rick Bolhuis said. “Hopefully, it will be less chaotic, and it’ll result in more kids being happy with their schedules.”

This year, FHC students will not have access to Class Choice; in fact, the system will not open at all.

While many students have always known Class Choice as the go-to schedule fixer, the changing circumstances of the school have made the program difficult to use.

In place of Class Choice, the administration has sent out a Google Form for students to fill out. The form requests students give a reason for their preferred changes, as well as their grade levels and class preferences.

“The end goal of this process is for all of [the counselors] to get in a room together and look at all the forms we got,” Bolhuis said. “Then, we’ll work together to find the best fit for each student.”

As of late, Class Choice has become infamous for being glitchy, creating anger and annoyance among students and parents. Because of this, FHC decided the Google Form approach would be more efficient for everyone.

“Class Choice only works well when there are many open spots in classes, but we don’t have that luxury anymore,” Bolhuis said. “The district staffing is a fraction of what it used to be, and there just aren’t spots available for kids to switch into anymore.”

When the district began cutting classes and teachers, remaining classrooms were filled to the brim. This sticky situation often leaves students frustrated at Class Choice, as each class they try to enroll in appears full.

“It’s an extensive process to set up the program for students,” Bolhuis said. “Everything has to be working right; classes have to have many open spots in order for students to find the classes they want to switch into.”

Rather than making students pull at their hair when they see a full class, the new Google Form will allow counselors to see changes on a holistic view.

This new method is also a way to make sure no students fall through the cracks on those requirements.”

“When we see that Student One wants to switch into fourth hour from fifth hour, and Student Two wants to do the exact opposite switch, we can make that happen when we see both requests in front of us,” Bolhuis said. “If both students are sitting on their own computers separately, though, they can’t see the possibilities to switch; they just see a full class.”

While many students take this change as a shock, the counselors are welcoming it like an old friend.

“We used to do in this way,” Bolhuis said. “Before the days of Class Choice, students would fill out a paper form and turn it into the counseling office. Now, it’s like that, only it’s just digital.”

This executive decision has allowed for many people, including teachers, to voice their concerns with the old scheduling method.

“The fact that we can change schedules digitally is cool,” math teacher Joseph Smith said. “But if I did it, I would get rid of the names of the teachers for each hour. That way, students will be able to choose classes more for the content, rather than what teacher they’re getting.”

From these anecdotes, Class Choice has been painted as a multi-faceted program– one that had seen both glory days and low points.

“From a teacher’s perspective, I would say that Class Choice allowed groups of students to all transfer into a class as a group of friends,” Smith said. “Depending on what type of kids they were, they could potentially bring detriment to the other students in the class and to themselves.”

Previously, Class Choice had allowed for students to manipulate their own schedules, which would often result in colorful messes.

“The idea of students being able to pick their own schedule is cool,” Bolhuis said. “But in reality, a lot of students forget about graduation requirements this way. So this new method is also a way to make sure no students fall through the cracks on those requirements.”

While the new program gets rid of students’ autonomy by providing merely request forms, it may save frustration in the long run.

“I mean, these are students who are sixteen or seventeen,” Smith said. “I think sometimes it’s okay for an adult to make these technical decisions for students.”

While this type of schedule requesting hasn’t been in place for many years, people are hopeful it will turn out less chaotic than Class Choice has been in the past.