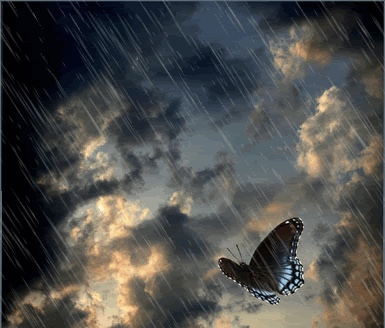 The unadulterated panic that flooded through me in ruthless torrents matched the synchronized chaos that met my eyes as we scrambled onto the street.

What had previously been a population of migrants escaping potential peril was now a storm of refugees fleeing the destruction that followed at their heels. They were no longer simply desperate but rather consumed with a ravenous determination to be liberated.

I caught the eyes of a little girl being tugged along abruptly by her mother, and in them, I saw an acute longing for salvation from the recent terror her world had been plunged into—a longing that could be found in every soul surging down this road.

Dagan was prophesied to be that salvation. And it was entirely on me that he would never fulfill that.

These people could yet escape the formidable fate that awaited them, but I could not escape the weight that fell laboriously on my shoulders knowing I was responsible for every one of these aching hearts and restless souls.

This story I had been writing had always felt so distant from reality; I never could have imagined it was real lives that I was shaping into existence.

And whatever phenomenon was currently transpiring was unfathomable to me. I knew this story better than I knew myself—every idiosyncrasy and minute detail. But, I’d never planned this.

Bria and I followed Dagan as he fearlessly forged ahead. No longer did we receive looks of concern and confusion as we pushed against the crowd. No longer did people call out well-meaning words of warning as we pressed towards imminent doom. Their focus remained on themselves and their possible destination.

The sky darkened steadily as we approached the blazing firestorm. The violent quaking and deafening claps of thunder had reached a temporary standstill, but muted flashes were still visible through the inky mesh of clouds, and the heavy scent of smoke infiltrated the air.

The dense hordes of people became more agitated the nearer we came to the ominous tempest. There was a unique sense of unity threaded through their despair—a unity that was amplified by a harmonious cry of distress as another tremor rocketed through the earth.

I stumbled and fell, my legs unable to withstand the earth’s violent heaving. A monstrous roar of thunder pounded above.

In its eventual absence, perturbed murmurs rose up from the street, and the efforts of people attempting to regain their footing and their senses echoed down the path. The noise was audible but for a moment before the earth rocked again, sending its inhabitants tumbling and drowning out their worries.

The thunder carried a different, more anguished tone this time as it reverberated across the sky accompanied by an unidentifiable flash. The shadows darkening the sky almost seemed to move, and as they did, the storm seemed remarkably closer.

I couldn’t make sense of the parallel storm in my mind—its senseless raging was nearly as muddled as the commotion surrounding me.  I knew I should do something, that I wanted to do something. But I was lost. Lost to an incalculable degree of the word.

And then an impossible nightmare manifested itself through the haze of clouds.

What we had thought, assumed, even hoped was only a storm was worse. A storm stops eventually. It lets the land and the people rest. It lets them heal.

A dragon does not. A dragon lays waste without end.

What we had thought, assumed, even hoped was only a storm was worse. A storm stops eventually. It lets the land and the people rest. It lets them heal. A dragon does not. A dragon lays waste without end. ”

The thunder. The lightning. The earthquakes.

It had all been a perfectly fabricated explanation for the true terror that seemed so obvious now. It was hard to distinguish whether we’d truly been unaware or if we’d wanted to believe it was just a storm so badly that we’d convinced ourselves of a lie.

Another thunderous peal—a cry of torment or ire—resounded above. A vivid movement was visible through the haze; a wing tilted in the wind, frighteningly close.

The resulting frenzy was hysterical. People pushing and shoving and scrambling to get back on their feet created a danger independent from the immense beast. Screams of terror blended, bouncing off of each other in the increasingly suffocating air.

Waves of heat wafted closer, and a sudden striking blaze illuminated the sky, catching the top branches of a tree. The air shivered above the clouds, seeming to shift and glow and waver. Another bellow filled the air followed by the crackling of flames, barely audible over the calamity.

The shadow stretched, soaring overhead. Its beam fell directly over us, and in a dream-like moment, I knew exactly what was about to happen.

“Get back!” Dagan threw back the hood of his cloak, for better or for worse, and unsheathed his sword.

The screams magnified, but the throngs of people dissipated.

“Go around and get to the woods! Get as far away from here as you can!”

The panic was tangible as the people forced their way past each other, and for a brief moment, I wished I could be fleeing with them, escaping this inconceivable nightmare.

My mind drifted for merely a second too long, and I was suddenly standing ten feet away, watching a dragon forcefully plant itself where I’d been standing just a second before.

Dagan’s arm maintained a firm grip on my arm for a moment before he dropped it, directing his undiverted attention to the magnificent yet incomprehensibly treacherous creature in front of us.

For a moment, the world faded away around me. I met the large, round, sparkling eyes of the creature. I saw pain that I did not know but could somehow understand. A sigh escaped my lips as I took in the iridescent scales and the extensive, transparent wings.

A flash of silver.

A drop of blood on the ground.

No longer in front of me, the dragon hovered in the air, wings beating soundlessly.

A plume of fire ignited a nearby tree, a warning not to take another step closer.

The tree was quickly engulfed in flames. Fires spread. And there were people in that forest.

“Dagan, stop!” I screamed, as he raced forward, sword raised, apprehensive towards attack. All he knew was fighting, and fighting was only fuel to the blazing fire right now.

But, my words did not reach his ears, or more likely, he did not let them.

He slashed again, and the promised consequence arrived; the dragon’s tail collided against him, and he flew backward.

“Dagan!” Bria lunged towards him in panic, but a column of rancid flames blocked her path.“Do something!” She screamed at me.

Out of the corner of my eye, I glimpsed Dagan weakly pulling himself up and beginning a doomed mission back to the dragon. He was already limping; another hit would knock him out and render him incapacitated.

The world stopped. It was only me. My scream to Dagan to stop was but a faint cry as I bounded forward. Sheer faith propelled my feet and threw my arms out as I stopped directly in between Dagan and the dragon—a shaking human barrier.

I heard the soft sound of the creature alighting on the ground, but the earth did not shake this time. For a brief second, I thought maybe that was it.

But, I couldn’t sidestep the blow quickly enough. A burst of pain flashed in my cheek, and I felt the warm blood trickling down. As if he’d been struck, Dagan fell back, his sword falling to the grass. Intense guilt crept into his eyes—shame and almost fear.

My hand slowly went up to my cheek, wiping the blood away.

A moment of clarity overcame me. It was solitary, isolated to this very instant. But, there were fewer things clearer than that moment.

I turned, making eye contact with the ethereal creature in front of me.

Real. So real. My brain, my ideas. It had brought all this to fruition.

I was in control.

I closed my eyes, and a wave of peace washed over me. When I opened my eyes, the dragon was gone.

A shimmering blue butterfly hovered in the air instead. A soft rain began to fall, sharply contrasting against the delicate, exquisite creature.

There was no ache to accompany the destruction of life because life hadn’t been destroyed. It had simply been changed.