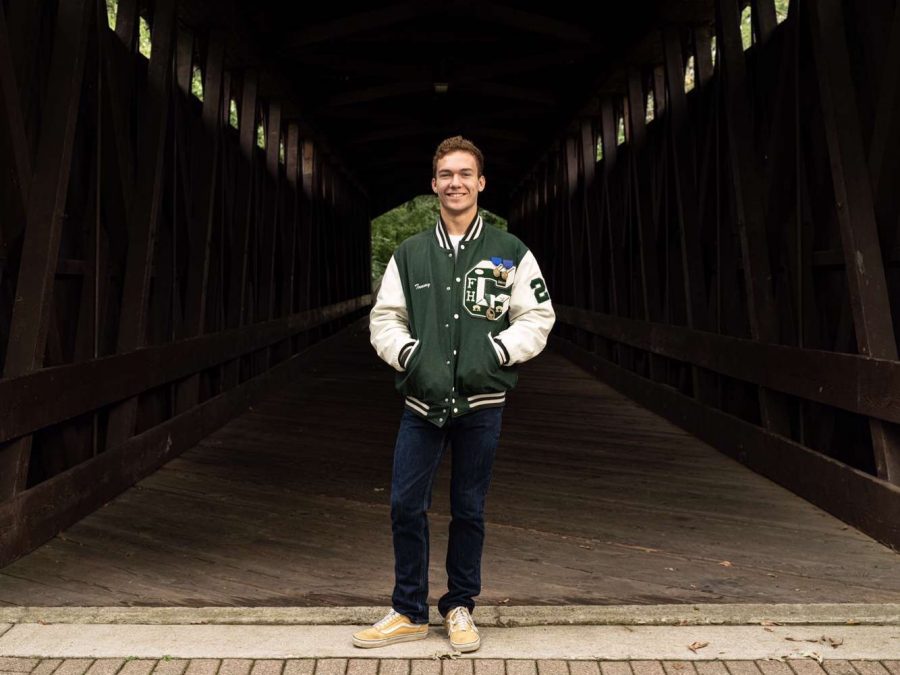 1. How surprised were you when your name was called at the Homecoming asssembly?

“Well, honestly, I didn’t even hear my name called at the assembly. It was the kids around me that were like, ‘hey Tommy, they just called your name so go out there.’ Before [the assembly], I had a lot of kids telling me that I was going to get on, so I wasn’t really too surprised, but it was an honor anyway.”

“I just jogged out there and waved without looking at anyone. *Laughter* Then, I just hugged the people that were already there, and then I just stood there and didn’t really think about what was going on.”

“Well, I’m involved in a lot of things in the school [like] Student Council and band and wrestling, and I try to be nice in general.”

“That’s a good question. I feel like Homecoming Court is just a—it’s literally just a popularity contest, so I’m not really a big fan of it. I don’t think there’s really a purpose. I think it’s fun to be around other friends of mine [on Court], and I guess the recognition is cool. Homecoming Court is about showing the community who the leaders are and who to look up to and role models, I guess. ”

“It’s cool that my peers would nominate me for this type of thing, but [the title] doesn’t mean too much to me personally. I’m not going to take it to heart; ‘king’ or ‘queen’ doesn’t mean much at all. Had I not gotten on [Court], I would probably feel the same. It’s not too big of a deal, but it’s cool to think that my peers think [well] of me. It’s less about the title and more the meaning behind it.”

“I’m definitely excited. It’s just kind of a cool thing. It’s not really a big deal at all, but it’s cool to be up there and enjoy my high school experience.”

“I know Meredith [Carpenter] pretty well. Meredith and I go way back—not really but sort of. In fifth grade, I remember the first time I talked to her because I wanted to play “Skyfall” for the talent show, and I asked Mrs. Kriekard who should sing it if I want to play it on piano, and she said Meredith Carpenter. One day, I walked up to Meredith at lunch, and I was like, ‘hey, I’ve never talked to you. Do you want to do the talent show with me?” She said yes, so then we had a little thing going on freshman year, so that happened. In the band room in one of the practice rooms, someone wrote [on the wall] ‘Tommy Hendricks loves Meredith Carpenter since the fifth grade.’ It’s not true, but it’s kind of funny, so some people say it’s a prophecy now. We were also Winterfest Prince and Princess our freshman year. We’ve also done Student Council every year together. So yeah, I know Meredith well.”

“I’m actually not going to be riding in a convertible because I earned the position of Drum Major, and I’ve never marched [in] the parade because I’ve always been on Student Council floats, and I’d rather spend my last and final Homecoming marching with the band and leading the band.”

“Well, John Courcy for Prom Court. That’d be awesome. Ben Kastner, Hayden Sarjeant— they’re good friends. Also, Meredith VanSkiver is incredibly well-rounded and does a lot, so definitely, definitely her. We’ll maybe see her on another court later in the year. Also, Payton Corcoran. He does a lot for the football team and Student Council. We’ll see. There’s still more courts to come. “

“No, absolutely not. I mean, I do my best at everything I do, I guess, and I care a lot about the things I’m involved in— my class, my classmates, and the general wellbeing of the school. That’s not going to change whether I’m king or not. I’ll continue being myself regardless of who wins, but it’d be cool to [win], I suppose.”

“I think that whoever wins shouldn’t take it to heart because we need to remind ourselves that this is simply a high school popularity contest, and that it’s not a big deal at all. It’s still cool, and we can still be proud of whatever happens. Like, be happy for each other, definitely, but we just have to remind ourselves that it’s not the end of the world if we don’t get it, and you’re not the king of the world if you do.”