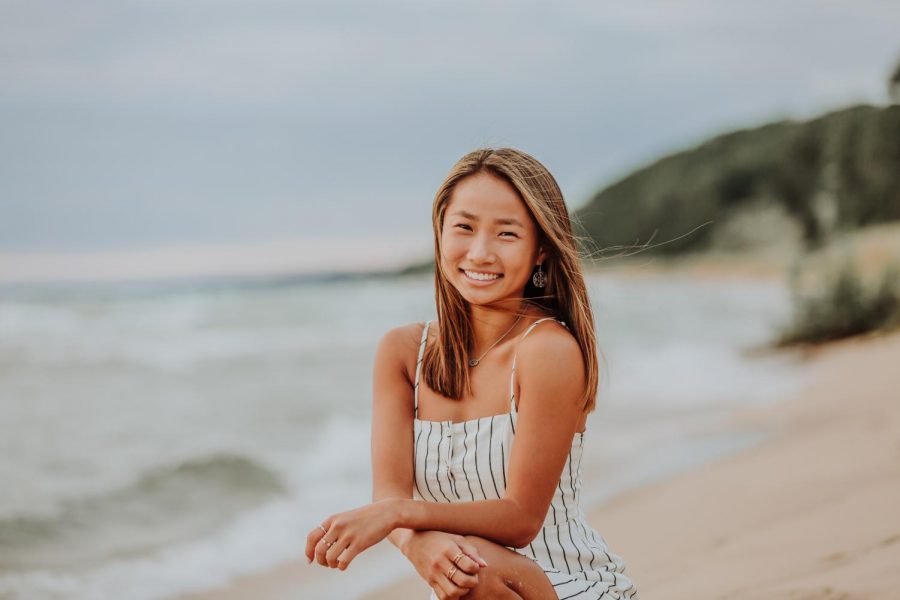 Surprised beyond words. I really wasn’t expecting it at all, and I was on the opposite side of the gym from the rest of my class kinda just staring off into space because I was taking pictures for the yearbook. It’s almost been an entire week and I’m still really surprised if I’m being honest.

Very awkwardly. I was next to some of the Student Council people and Sarah [Buchanan] and Meredith [Vanskiver] were cheering and being so supportive. I think my legs just started moving, and I don’t even remember what was going through my head besides, “OMG. don’t trip.” It was pretty nerve-wracking walking across the gym in front of the entire school. A lot of people asked me why I looked so serious afterward, but I was just super nervous and focused on not tripping. As soon as I got to everyone else, I felt so much better though. Ali [Azeem] gives really good hugs.

I have no idea. Everyone in our senior class is so unique and amazing in their own way, and they all deserve to be recognized in some way. It’s so cool to think that out of that huge long list of our entire grade, some people thought of me. I’ve definitely made an effort to step out of my comfort zone this year because I want to get to know everyone a lot better, be more open-minded, and try some new things. I feel like I’ve changed a lot this year as a person, so maybe it’s that, but I honestly really don’t know.

I know Homecoming itself and Court are big traditions in many places, but I think it represents a group of people called to attention, so they can be appreciated. I think at FHC specifically, its purpose is to kick off the school year by honoring the senior representatives and the senior class as a whole and to set an example to underclassmen [of] what it means to be a Ranger.

It means the world to me. My heart is so full of love and gratitude for my class, and I’m truly honored. Everyone on Court is also so incredible, and I’m so excited to have this experience with the rest of them. I seriously cannot thank everyone enough. It is so cool to even think about. I can’t comprehend it—it’s unreal.

So so weird. I know everyone says it, but you really don’t realize how much you appreciate some things until they’re gone, and now that it’s the year of lasts, I feel like all the seniors are seeing everything so differently. It’s not necessarily sad, I mean, I am sad it’s ending, but I just feel like we’re all so much more inclined to get involved and really make these last Homecoming traditions the best ones. There’s been a lot more participation. It’s also weird because it feels like freshman Homecoming was just yesterday, but honestly, not much has changed because I still don’t know how to pin a boutonniere very well. Anyway, I love this class, and I’ve already had so much fun this Homecoming season helping out with the banner and the float, learning lip sync dances (and crying during Starships), doing Powderpuff, and going all out for this last Homecoming spirit week. I wouldn’t want any of it any other way.

I am so thrilled! There are so many exciting parts to it, and I can’t wait. Jasmine [Dawson], Susan [Toppen], Jenny [Baer], and Meredith [Carpenter] are all the sweetest girls ever and so much fun. They are honestly the ultimate support system, and we have a cute little group chat, and they all make my heart so happy. Us girls are all pretty confused about what’s going on a lot of the time, but thank goodness we have each other. Also, all the boys are so amazing as well. It’s just a great group of people to be around and we’ve already made some silly memories like embarrassing ourselves and doing the wave and some nice jazz squares at the Ranger Rumble. It’s an experience I’ll cherish and never forget.

I’ve had multiple classes with Suchir [Gupta] in the past. I had AP Chem with him last year, and he was kind of my therapist, not going to lie. He’d give me a lot of encouraging pep talks when I was stressed, which was basically every day, and walk me through everything I didn’t understand how to do, which was, again, basically everything. He’s so patient, selfless, funny, caring, genuine, hardworking—the list could go on forever. Long story short, I love Suchir to death, I mean, who wouldn’t, and he’s a tennis-chemistry-rockstar dude. Also, I beat him in Super Smash Bros not once but multiple times last year on the last day of Chem, spread the word.

We still aren’t exactly sure if Ali and Suchir will be able to make it to the parade or the game since they’ll be at states for tennis at U of M. Although Jenny and I are slightly bummed out we won’t get to ride in the convertible with our fellow nominees, we’re still super proud of their accomplishments. Either way, we’ll all still be rooting for both of them to succeed. Just being nominated and paired with Suchir is an honorable enough experience for me. I like to think that Suchir and I would have talked about my victory against him during our Wii tournament in Chem and probably about how cool the entire experience is. It definitely would have been such a fun time with someone as hilarious as Suchir.

For real, so many people. I could name over half our grade and give valid reasons, but I’ll keep it short for time’s sake. First of all, so many of the student council girls need to be recognized for their dedication and leadership roles at our school. Sarah Buchanan, Meredith Vanskiver, Laura Salas, Ella Guikema, and Maggie Zorn. They are the most genuine people I have ever met. They all do so much for our community, yet they’re always giving to others and smiling and spreading positivity and love. I love them all. Also, I feel that Megan Raisch is just overall a phenomenal person. She has been my track and hurdle buddy for three years now, and I’ve gotten to know so much about her fun, bubbly personality. Megan is a sweetheart and never fails to make my day better. Matt Henriksen and John Courcy! Such cool, funny guys who help others in so many ways, and they seriously blow me away in the drumline every time. Grant Adrianse and Pranav Nalam. Two awesome guys in so many different ways. Liza Canaj and Elise Rapeyko with their contagious personalities, and Maizey Szeczepanek deserves a shout out for her spirit and dedication to the student section. I wish I could just make a list of everyone in mind, but this is already so much longer than I said it would be.

Honestly, I’d be ecstatic if any of the ladies on Court got queen. They are all so deserving of it. But if I had to think of one, my campaign promise would be to go Tik Tok famous for the whole school. I have yet to get there, but I’m still optimistic. My fame is long overdue.

Thank you all for being you! You rock. You’re all amazing! No more EEE, woohoo!! Go Rangers!