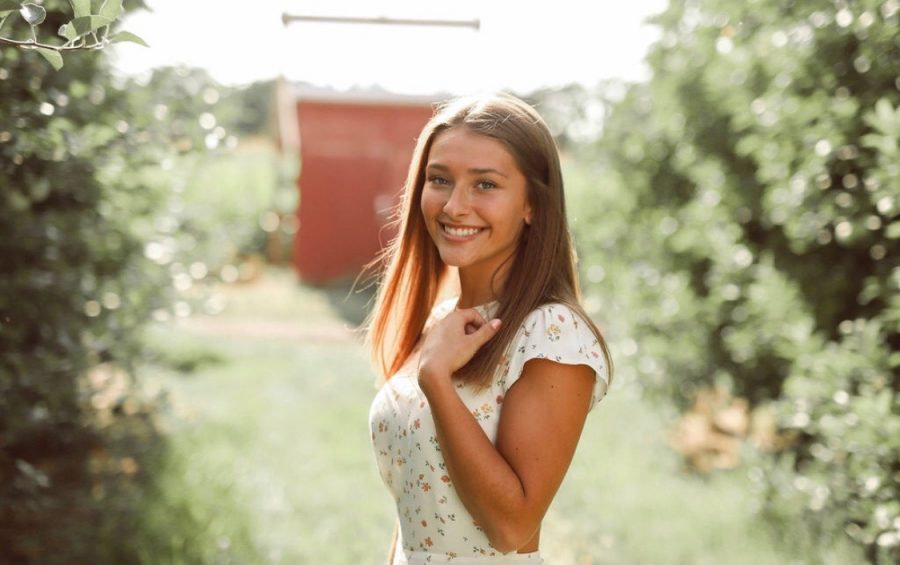 “I literally freaked out because I didn’t know if he actually called my name or not, and I was like, ‘do I stand up? Do I stand up?’ and then [Mr. Labenz] called it again, and everybody was like, ‘Jenny, stand up’ Then I walked up there, and I stood in front of everybody. I was like ‘whoo!'”

“I feel like maybe it’s just because this year I’ve been trying to branch out and talk to more people, and I feel like I’ve been doing a pretty good job of it. For most of my life, I’ve had a solid friend group—we’re still super good friends and super close, but this year I’ve been trying to talk to more people and just make more friends and be way more friendly to people and stuff like that. So, maybe that’s why. [Like at] Senior Retreat, I talked to a whole bunch of more people that I wouldn’t normally talk to.”

“I feel like everybody on Homecoming Court, especially this year, is so nice and so deserving to be on there. All the other girls are so nice, and they are just so supportive, and they’re involved in everything. I feel like everybody votes for certain people that they want and think [represent] what the school’s supposed to be. I think that Homecoming King and Queen are supposed to be the representatives of the school during that time period. I think [it’s] to get who [the students] want the face of the school to be.”

“It was a huge honor because I know Homecoming is like one of the biggest dances. We go at half time [during] the football game, which is huge because you’re in front of everybody, and then you have like two or three different assemblies and stuff like that. I just feel like Homecoming is the most interactive and the most involved dance type thing. It was a huge honor for me, and I am so thankful.”

“They’re way more fun. Honestly. They’re way more fun, and I want to be involved in everything now. Freshman year, I was scared of them. Sophomore year, I was debating it. I got involved in a couple of things last year. This year, I literally want to be involved with everything. I was sad that I wasn’t able to help design the float because I got busy with my extracurriculars, but I was so mad that I wasn’t able to like paint and stuff. It’s a lot more fun senior year.”

“Oh, I love Ali [Azeem]. His brother was actually my tennis coach, so I’ve known him for a while. Ali [and] I know [each other] from tennis, and then this year, I feel like we’ve gotten a lot closer just because we have a lot more classes together. We have AP Bio together, and he’s—for some odd reason—always my partner. It just always ends up that way. We [get partners] randomly, but he’s always my partner, and so it’s really fun, and he’s so smart. I admire him a lot.”

“I honestly don’t know if [Ali Azeem] is going to be there because of tennis States, but if he is, I am going to be excited to ride in a convertible with him, and I don’t know what we’re going to talk about—probably just me being nervous because I hate being in front of people. Other than that, I am very excited. I hope I don’t fall out.”

“Oh yeah. I feel like there’s a lot of people, especially girls because I just know more girls than I do guys—there isn’t anyone specifically—there are so many other girls that I [would like to recognize] just because they’re involved and social and stuff like that. I voted for Meredith [Carpenter], and I voted for Susan [Toppen], and I voted—oh wait, I actually think I voted for all of them. They’re super, super sweet. People love them. I definitely feel like there’s a lot of girls in this grade deserving of a position like this.”

“I would make Vitale’s cater at lunch.”