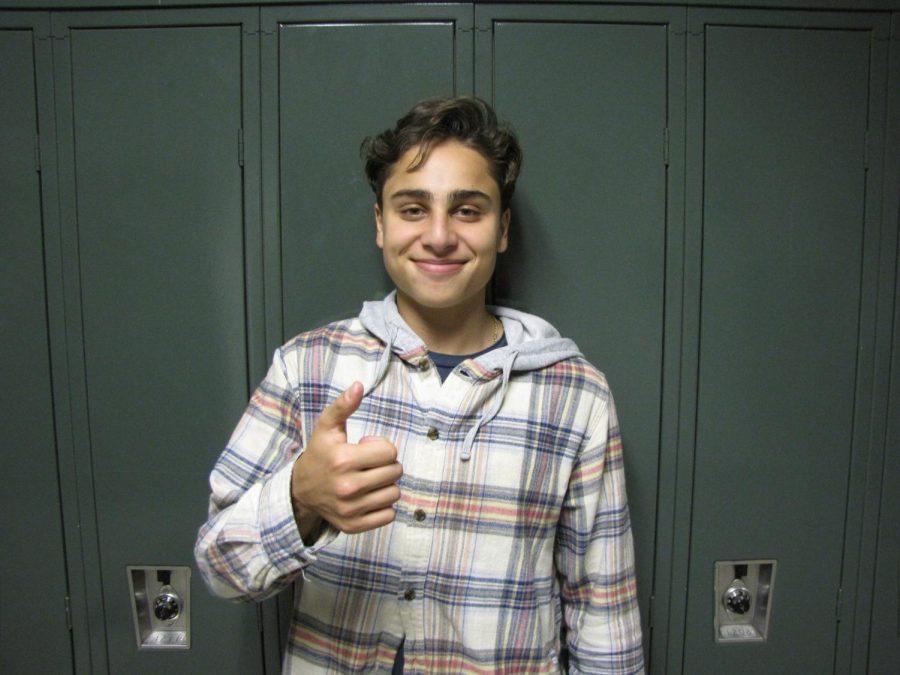 1. What family member is traveling the farthest to see you in the play? How far? Why are they coming?

“I’d say my brothers. They’re coming from Ann Arbor because they go to college at U of M. They are coming the whole weekend; so, they’re coming on Friday, and then they are staying until Sunday, and so they’ll probably get to see the show either Friday or Saturday night.”

“[They are] very important because I feel like this play has really opened my eyes and made me a lot more inclusive of other people at tech. It’s also showed me that there’s more than just sports, and there’s a lot more activities that I can have fun with than just being on the field or on the court.”

3. How does Mrs. DeMeester get the best out of you and the entire cast

“I’d say Mrs. DeMeester and also the other two student directors, which came in this year, Ms.Kooistra and then Mr. Curtis— they’re both excellent and so is Mrs. DeMeester— because I feel like this student directors did a lot of blocking, which helped us be in the different positions we have to be in for the show. And then Mrs. DeMeester told us how hard we really have to work to make the show great. She really opened our eyes to how successful FHC theater has been in the past, and she doesn’t want that to let that all go now. So even though we have so many new people, she still has those high expectations, and I think we’re living up to them.”

4. How many lines do you have, and how long did it take you to memorize them?

“I have about 55 to 60 lines. I’d say it took probably a good two or three weeks to memorize all of them because this is my first play, and it’s like a really hard one to start off on. So, it took a bunch of time, and then by that point, I had to learn where I was going on the set as well as that and also do school at the same time. So, it’s very hard. I did whatever I could [to memorize them]. So in different classes where I would have free time, I’d look at my book, and I’d go over them, and I’d cover up lines and make sure I knew them, and I’d go like five to ten lines at a time. And then once I could memorize those, I’d move on and move onto the next act or the next couple of lines. Then, I’d run them over with someone else to make sure I wasn’t cheating myself on the lines, and I knew them. What was really hard about it was getting into a character and saying them and not just saying them when I’m sitting down.”

5. How do you “get into character” before the play starts?

“I try to be alone. I’d say talking to other people kind of distracts me. So if I’m alone, I’m thinking about the character I have to be and the lines I have to say, I say them a lot more into character.”

“I’d say a lot of drama, also a lot of yelling, because this is a very serious show and obviously The  Crucible is about people getting accused of being witches, which now we know is obviously false. But, a lot of people are being hanged that are very important to their wives or husbands, and people are fighting for their family members, and that’s where real emotion comes into play.”

“I’d really like to thank the lead actors—people like Aaron Jachim on, people like Alexander Hahn, who have really put everything into this play. They’ve got two to 400 lines, and they’re just absolutely going all out and showing other people what it’s like to be at that high level of acting and showing other people what they should act like in rehearsal. Even though it is a rehearsal, we should act like it’s always a play, and we’re acting in front of everyone.”