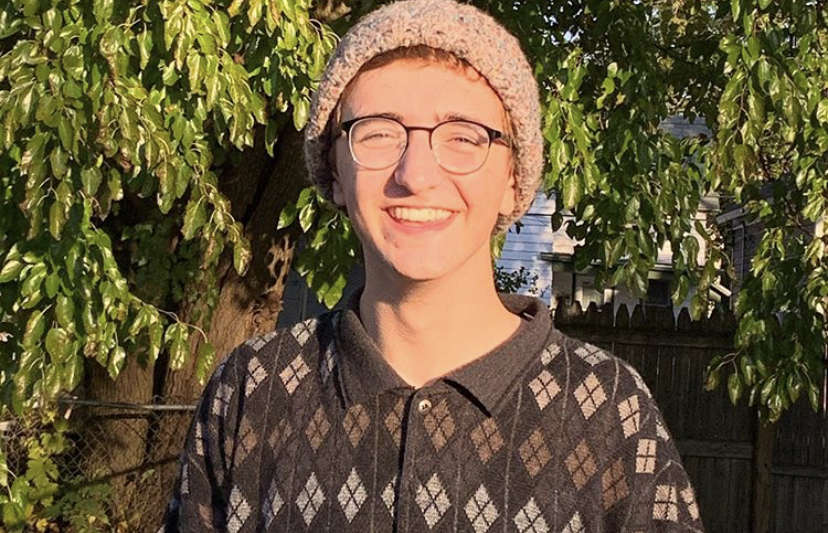 “Having a small cast has been nice because it has made me a lot closer to everyone, and also a smaller cast is much more COVID-19 friendly. For disadvantages, it’s definitely much more pressure on each person, and that makes things a little stressful.”

“In all honesty, I don’t fit any of my roles at all whatsoever. My characters range from a naive German boy to an evil stepsister to an anti-feminist dwarf to a weird, Minnesotan Rumpelstiltskin. I think I landed these roles because I am a bit of a chameleon when it comes to acting—or at least, I’d like to think I am. Or, who knows, maybe people perceive me as an anti-feminist dwarf.”

3. What have been some difficulties in your role(s) at rehearsals?

“The biggest difficulty this year, for me, has been diving into each character and really understanding them. Since I have more roles than the average cast member, it adds more pressure to create backstories and unique traits for each character. It was definitely a journey this year to create all of my characters, but I’m happy with how they turned out.”

4. What is your favorite part in being involved in the play/theatre program?

“100% it’s the people. I love acting and being on stage, but none of it would be worth it if I wasn’t surrounded by the people I’ve grown to love through this process. So many of my closest friends are in theatre, and rehearsal is really just an excuse to be around the people I love. Also, I just adore [theatre head] Robbin DeMeester.”

“It really just depends on the day. I am a sucker for Devil’s Grandmother, though.”

“Theatre, as a whole, has had a huge impact on my high school experience. It has introduced me to some of my closest friends, and it’s given me so many memories that it’s almost upsetting. Theatre has made me so, so nostalgic because, at every rehearsal, I’ll realize I’m having fun, and then it’s like ‘well, this will all be over soon.’ So, I guess theatre has taught me to cherish every moment. Also, as much as I love theatre, it is stressful with a capital ‘S.’ But, I wouldn’t have it any other way.”

“The thing that surprised me most about this year’s show was the sheer amount of creativity in the cast. Our wonderful director Ashley Kooistra had such an amazing vision for the show, but she never let our voices go unheard. She always found a way to incorporate our ideas, and that teamwork really turned the show into something else. The cast always had so many ideas that were so above and beyond, and we found a way to make everything work, and it has definitely made the show into a performance worth watching.”