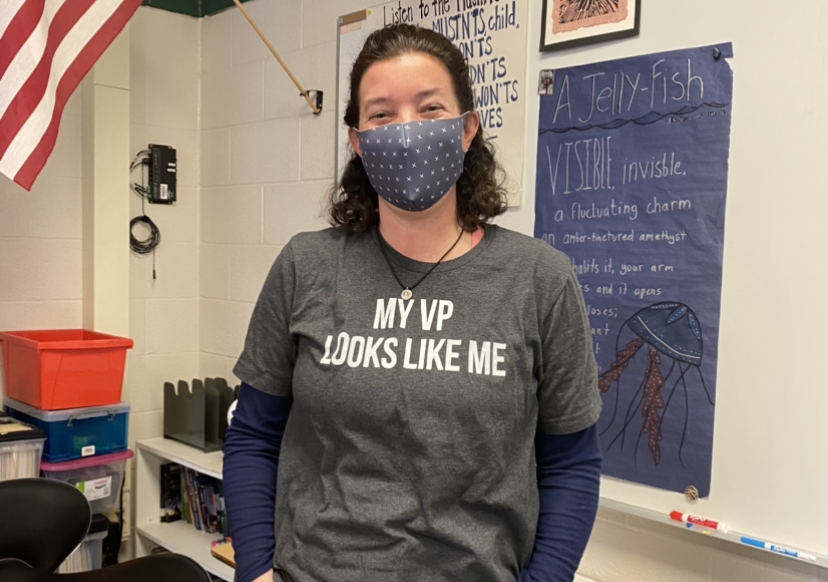 Dr. Anne Keller is an English 9 and AP Language and Composition at FHC since the beginning of this school year.

Years at the school: 1

“Up there on my greatest achievements [is] getting my PhD—that was pretty huge, especially while I was working full time, which most people don’t do. And it was in New Hampshire, the school where I went, so I had to travel during the school year. It was a lot; that was an accomplishment. I would say having some poems published. I won different places in the Dyre-Ives Poetry [Competition] for Kent County. So I do have some poems that have been published; it’s a booklet—it’s called Voices. I’ve had some articles published. I guess my writing accomplishments, my education accomplishments—those are probably the big ones.”

“Most of the exciting experiences that I’ve had have involved being able to travel different places around the world. Living in France for a semester was very awesome. And then I have friends who live in England and friends and family in Greece. I actually took a couple of classes through Michigan Tech. One was kayaking on Isle Royale and another one was backpacking on Isle Royale. Those are cool. I also used to do these things called The National Endowment for the Humanities American landmark grants, where you get to study for a week at a national landmark. So I got to go to Mark Twain’s house and studied in Hartford, Connecticut. I spent a weekend studying at Twain’s house. I spent a week in Mississippi studying at Eudora Welty’s house—not in the house, but around the house in the environment. I learned how to farm near Kalamazoo. There’s a place called Tillers International which teaches people about traditional farming practices, so I spent a week learning how to farm and eating fresh bread. I guess just being able to travel and see different places and different people—that’s all cool.”

“First and foremost, I’d say my mom cause she’s pretty darn cool. I think [someone] I admire would be [Ruth Bader Ginsburg]. Her life story is pretty exceptional and just everything that she went through in order to not only achieve but to help others. I find that that’s what I like reading about [in] different women leaders. Even Kamala Harris, at an early age, she wanted to help other people. And I think that drive to service, that’s something that my mom values and I value. There are a lot of authors that I like and respect and people in my community that I think are pretty cool. Dr. Dockeray was the person who started Blandford Nature Center, and she was someone I always looked up to. She was cool because she used to hang out in the woods all the time as a kid. And then as she grew up, she studied geology actually, and she came up with a plan for an environmental school, which became Blandford School; that’s where I went in sixth grade. She was the first woman I met who had a PhD, so I always thought, wow. She could hold owls on her arm, and she was just really impressive that way and just knew everything about plants and trees and stuff that I like too and the outdoors. So she’d be someone from an early age that I looked up to.”

“I think I’ve served in a lot of different capacities to do that. I volunteered to coach a LEGO robotics team for elementary kids. The other coach and I both were very committed to having even girls and boys on the team and then helping girls see that that was a field or an experience that could be beneficial for them. I do a lot of work with kids, so trying to show them, when I taught science, that science is something that girls can do was really important.”

“I think one of the biggest obstacles I’ve had to overcome is, and I don’t know if it’s because I’m a woman or because I’m just really sure of myself, but I think that either one or maybe the combination sometimes makes it difficult in different environments to be a smart, independent, solid thinker [and] speaker; that can be intimidating to others. So that’s something that I’ve kind of had to feel like I have to downplay things sometimes or maybe not express everything that I think in certain situations because it can create challenges sometimes. I think a lot about women in leadership roles, and I think they have to be sort of tenacious, but they also are sometimes insecure. And I think when you encounter women who are insecure and you’re not, that’s tricky. Everyone should be moving forward, but if you’ve got a lot of insecurities, then you’re not all moving forward; you’re pitted against each other, and that’s not productive. So I’ve been in those situations that aren’t always productive because of somebody else’s insecurity.”